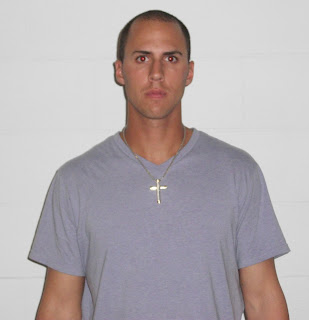 Baseball requires a player to master a lot of athletic skill and precision. Most successful players focus on a specific position, either as a hitter or pitcher, so they can consistently improve on the necessary abilities.  Thus it must be daunting for those about to enter professional baseball to be asked to completely change what they had trained to become their entire lives.


J.C. Menna was a shortstop growing up. With a wiry frame and strong arm, he was a prototypical player for the position. He was drafted in 2007 by Pittsburgh in the lower rounds, but ended up playing college ball at Brookdale Community College. Like many shortstops, Menna possesses a strong arm, so when he was drafted by the Oakland A’s in the 14th round of the 2010 MLB draft, he was asked to convert to a pitcher.


If Oakland felt Menna fit best in their plans as a pitcher, then he was happy to make the change and put himself in the best possible position to progress towards his goal of playing in the major leagues. Two years into the change, Menna has not yet fully adapted, as he has failed to post an ERA under 5. He was primarily a starting pitcher for the first time in 2011, going 2-7, with a 5.79 ERA in 53.2 innings. More information about his career statistics is available at http://www.baseball-reference.com/minors/player.cgi?id=menna-001ger.


I have personally seen a couple of different things concerning Menna that left me impressed. First, Menna is a natural when it comes to interacting to fans. Despite his hectic schedule, time and time again, I observed him having quality interactions with fans at the ballpark. This is a rare quality to have, and only enhances the totality of a ballplayer.


Secondly, Menna pitched one of the grittiest games I have ever seen in person. On September 4th, the last day of the regular season, Menna’s Vermont Lake Monsters were playing Tri-City, needing to win and an Oneonta loss in order to make the playoffs. Down 5-0 early, Vermont brought Menna into the game in relief, and he responded with 4 shutout innings that helped his team win the game, and ultimately gain a spot in the playoffs.


Menna seems to have all the physical and mental tools to make a serious run at being a major league player. Only time will tell if he can put it all together and produce the results. I will be rooting for him, and wish him all the best because he is the kind of guy who deserves and earns everything he accomplishes.


JC Menna Interview:
How did you first become interested in baseball?: Believe it or not, the first time I got interested in baseball, I think I was four years old out in the back yard at my grandparents’ house. It all started with whiffleball. My Dad and some of my grandparents were just messing around and throwing the whiffleball. I was hitting it and I was throwing it, and they couldn’t believe it. Ever since then I did T-ball, Little League, junior high, high school, college, and now pro ball.
Were you always a pitcher?: Actually, I wasn’t a pitcher until about two years ago. I was always a shortstop. I got drafted out of high school by the Pirates in the 39th round as a shortstop, but went on to a few years of college, and then realized about two years ago that pitching was probably the best fit for me. It just all worked out.
What do you throw for pitches?: A four-seam fastball, a two-seam fastball, a changeup, and a curveball.
Who was your favorite player and team growing up?: I have to say that I was a New York Mets fan. One of my favorite players I always idolized was Derek Jeter. I love the way he plays the game, and love his competitiveness. He always won, and he just knew how to handle everything; the media, the pressure.
How has your experience been so far in the minor leagues for you?: It’s a little different than I expected. It’s a grind. It’s the minor leagues, but it makes you hungry to get to the big leagues, I’ll tell you that. It’s not the easiest; you’re tired a lot, but those guys who play through it, and fight through the obstacles are usually the ones who succeed.
Is it difficult to adapt to the attention you get as a professional player with things like autograph and media requests?: I look at it like one of the coolest things in the world. I remember when I was a little kid, I was one of those kids going out to the game, asking for autographs, just idolizing those players. So, I try to sign as many autographs as I can, and try to talk to as many people as I can because I like doing it, and I like interacting with people. It’s a joy for me as well to give back to them.
**********************