The Contrast Between Theo Epstein and Brian Cashman 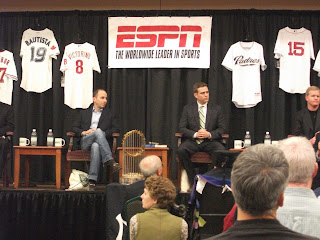 
I had the opportunity to chat with and observe each of the three GMs, and was particularly fascinated by the contrasting personalities of Epstein and Cashman. They both came across as incredibly knowledgeable and dedicated to their profession, but also seemed vastly different as individuals.


Epstein arrived in a chauffeured town car with a couple of people I assumed were part of his staff. He wore an expensive looking pinstriped suit, and his quiet and prim demeanor made him every inch the classic Yale man. He answered all questions posed to him while participating in the panel, but it was clear his answers were held a little closer to the vest than the rest.


Brian Cashman couldn’t have been more different. I met him while I was chatting with Buster Olney outside prior to the start of the event. Cashman drove right up to us in his black jeep with the 2000 World Series trophy stored in his trunk. He immediately came over and introduced himself, and shook my hand. We chatted a bit, and he declined the offer from my friend and I, as Red Sox fans, to help him transport the trophy indoors. Cashman was much more casual than Epstein, from his jeans and blazer to his relaxed and chatty nature. His answers during the panel were also extremely open, particularly with how he detailed his up and down relationship with George Steinbrenner.


I was one of the lucky few audience members who got to pose a question of my own to the panel. I asked Epstein and Cashman which trade they made or didn’t make, or free agent they signed or didn’t sign, that they would like to do over if they could. I hope that you find their answers as interesting as I did.


Theo Epstein: There are too many to recount. The one’s that keep you up at night are the ones where you question your own process. The ones where you have a good process and ask all the right questions, you have the right scouts on it, you’re looking for the right information, you perform the proper analysis, and you made the trade for the right reasons., we were very thorough with all due diligence. You look at every possible angle. When you do a deal like that and it doesn’t work out, that’s baseball. The ones that keep you up at night, and thankfully I haven’t had many of these, are where you compromised the process a little bit. You’re looking for a quick fix or you’re too close to the situation


There was the Doug Mirabelli trade. I was on the road with the team when Josh Bard was having a hard time, a really hard time, handling Tim Wakefield. I rushed into that Mirabelli trade, and that was a mistake. I compromised the process and I learned from that. Those are the ones that I would say.


Brian Cashman: Let’s see… I’ve got a few myself. It was very tough to trade Mike Lowell. We won a World Championship, [Scott] Brosius was a terrific acquisition that I was a part of. Bob Watson, who was the GM acquired Scott Brosius. At worst he was a utility player for us, and if he could handle third it would be tremendous. He became World Series MVP. He was a great post season performer and part of why I have the certain amount of rings that I have. But, we had a guy at Triple-A, Mike Lowell.


When we signed Brosius to an extension, we were thin on pitching, so I traded Lowell to the Marlins for three high end pitchers. Eddie Yarnall and Todd Noel, all first round picks. Yarnell was the number one pick for the Mets, Noel for the Cubs. We also wound up with Mark Johnson. Ultimately it was all for naught. Lowell went on to win the World Championship with the Marlins, and then he went on to win World championships with the Red Sox. I would like to have that one back.


There were certainly a number of free agents we’ve had to eat.