The Age of Ruth and Landis: A Review

Baseball entered a new era in the 1920s. The home run was popularized the emergence of irascible slugger Babe Ruth and for better or for worse the game was cleaned up in the wake of the 1919 Chicago Black Sox World Series scandal by the appointment of Judge Kenesaw Mountain Landis as the game’s first commissioner. This resulted in a revolution in governance and broadening economics in the game, both in the major leagues and the Negro Leagues. This compelling growth of the business of baseball has been thoroughly researched and written about in David George Surdam and Michael J. Haupert’s The Age of Ruth and Landis: The Economics of Baseball During the Roaring Twenties (University of Nebraska Press, 2018). 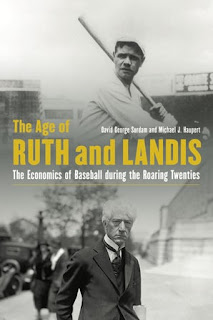 You don’t have to be knowledgeable or even that interested in economics to appreciate the new layer of depth Surdam and Haupert have provided baseball history with their groundbreaking work. Although the play on the field remains of utmost importance, these details provide rich context that allows the game and many of its key figures to be seen in new light.
The first step in the evolution was bringing Landis on board. Although he was heavy handed and often immovable, he drastically changed the landscape by bringing a new level of discipline and even dread that cut back on gambling, inappropriate fraternization and other activities deemed to be a threat to the game. This had a lateral effect of also giving even more power to major league owners, as attempts to circumvent their stranglehold on controlling the game were met with a reinforced wall of resistance.
Initially, money was made in professional baseball by sheer spectatorship. However, by the 1920s, owners were implementing new initiatives to expand profits. Concessions, different levels of seating and renting out their parks for other events and even teams like those from the Negro Leagues brought in new dollars. However, teams did not consistently reach solvency. Inability to draw consistent crowds, national crises like war and the Depression all served to stifle growth.
A critical selling point of The Age of Ruth and Landis is that they don’t just stop at Major League Baseball. They have also included data about the Negro Leagues, which if anything is even more interesting. In addition to similar challenges faced by their white counterparts, they faced additional roadblocks like consistently being able to secure venues and keeping their players from going AWOL occasionally to buffer their paychecks by temporarily contracting to appear in exhibitions and other paying baseball gigs.
The economics of baseball have always been shrouded in mystery. In the past owners would often plead poverty as reasons why they couldn’t pay players more, upgrade venues or acquire better talent. At times this was mostly true and complete fabrication. Some teams did have difficulty drawing fans, which could really impact their bottom line, but others made tidy profits. There were also efforts made to keep less-solvent franchises afloat, as the financial health of the two leagues was of the highest importance before all else.
Surdam and Haupert have compiled a thoroughly researched and snappily written book that keeps you engaged throughout, even if you don’t have a proclivity for bean counting. It’s another important thread in the rich and complex tapestry of baseball history and is a worthy addition to the shelf of any self-respecting baseball bibliophile.
Disclaimer: I was provided with a free advanced copy of this book but received no payment or other consideration for this review.