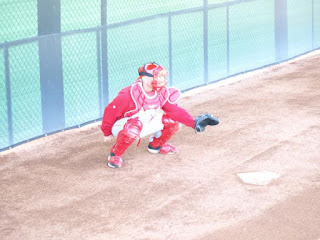 Professional baseball teams are comprised of many more positions than just those on the active 25-man rosters. One position that is largely forgotten by fans is that of bullpen catcher. Keeping pitchers warm and stretched out is an integral job on every team, whether it is on game day or part of off-day routines. The allure of becoming part of the team attracts many to bullpen catching, and gaining a spot can be just as difficult as any other on the roster. Becoming a big league bullpen catcher is Mike Gener’s dream, and he is chasing it as doggedly as any top prospect honing their talent to become a major league player. He is for all purposes, baseball’s version of Rudy.
The 27 year old Gener’s path towards professional baseball is not a typical one. He was born and raised in San Diego and his quest to become a bullpen catcher is made all the more interesting because he never played organized ball. He attended Rancho Bernardo High School, which produced the likes of Cole Hamels and Hank Blalock, proof of the seriousness of baseball where Gener grew up. Unfortunately Gener was ineligible to play during his high school years so he could focus on academics.
Despite a lack of organized playing experience, Gener has always loved the game and determined that becoming a full time bullpen catcher is the best way to remain part of it. He has moved to Arizona to increase his chances to catch on with a team. He has already found some part-time catching work, but is hoping to latch on with a professional team for the upcoming season, with the goal of one day making it to the big leagues. He has thrown everything he has into his dream and with every job he gets, he moves himself one step closer to bringing it to fruition.
For more on Gener’s story, check out his recent interview. You can also follow him on Twitter and check out his blog http://bpcatchergener.com/ for updates as the season goes on. It is great to see a person going after their dreams with such determination, so show Gener some support, which is sure to go a long way in helping him reach his goal.
Mike Gener Interview:
Who were your favorite team and player when you were growing up, and why?:  For my favorite team, I would say the San Diego Padres since I was born and raised in San Diego. And Tony Gwynn since he played for the Padres and he was one of the best players ever. During the off-season in San Diego, when I worked out with some of the Padres, Tony Gwynn was there every day with us, so that was cool meeting him and being around him all the time. He is a great guy with some amazing stories.

What is your background in baseball?: The funny thing about my baseball background is that I never even played high school, college, or any pro ball. It amazes everyone every time I tell them that. I'm out catching bullpens and throwing BP to big league and minor league guys. It’s been a fun part to my story and everyone wonders how it’s possible that I'm working with the best guys in the game.

Can you explain your motivation to become a major league bullpen catcher?: Like every other young boy I always wanted to play in the big leagues. Since I never did that I was always thinking about a way to still get in the big leagues, and being a bullpen catcher/BP pitcher was the best way for me. I love being around the game and helping others get better, so it’s something I really want to do.

What have you done thus far to achieve your goal?:  So far I have caught bullpens and thrown BP for some Padres players, D-Backs, Rockies, Angels, and for the Scottsdale Scorpions in the Arizona Fall League. Also, just meeting the right people and telling them what I'm trying to do helps get my name out there.

How difficult is it to make the proper contacts in professional baseball?:  It’s not hard to make contacts in baseball. It is all about who you know though, and that makes it much easier to get my name out and to meet the right people. Before I moved out to Arizona I already knew a pretty good amount of players/front office/owners, so that for sure has helped me a lot. A family friend that I hang out with a lot is a part owner of the D-Backs, and he has introduced me to a ton of people and I have gotten to experience some cool stuff with him.

If you could catch a bullpen session for one pitcher in their prime, who would that be?: I think it would be fun to catch Randy Johnson, Roy Halladay, and Greg Maddux. I love how much their ball moves and they are all such amazing pitchers, and I believe will all be Hall Of Famers.