Francisco Lindor: The 8th Pick in the 2011 MLB Draft 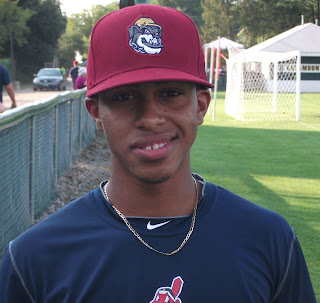 Most 17 year olds are making decisions like what they will major in college, or who they plan to take to prom. A select few encounter more life changing issues, like whether or not to sign a contract to play professional baseball, and if so, how much money they will require. With the MLB draft signing deadline having recently passed, those were questions pondered by a number of young players.


Recently, Francisco Lindor had to make tough choices about his future, deliberating between playing baseball with the Cleveland Indians or going to school at Florida State. The 17 year old Lindor, a switch-hitting shortstop, was taken by Cleveland with the 8th overall selection in the first round of the 2011 MLB draft. He is the first high school player they have taken in the first round since 2001.
It went right down to the August 15th signing deadline, but Lindor ended up choosing to play professionally rather than go to school. The 2.9 million dollar signing bonus he reportedly received undoubtedly helped influence his decision. He will now begin his trek through the Cleveland minor league system, with the ultimate goal of becoming a star player at the major league level.
Lindor moved from Puerto Rico to Florida when he was 12, and became a baseball sensation. During his senior year this past spring, he hit a crackling .528, with 6 home runs and 20 stolen bases for Monteverde High School. It was little wonder that he was coveted by a number of teams in the draft, before Cleveland took him off the board.
Scouts are already drooling over the five tool potential of Lindor. Despite his wiry 5’11 frame, he recently won the home run contest at the AFLAC All-American Classic. He is also gifted defensively, and many predict that he will eventually become a major league star. A person in the Cleveland organization told me that they could not recall seeing a player as young as Lindor already be so polished and natural.
Shortly after signing, Lindor joined the Mahoning Valley Scrappers in the New York-Penn League. Team sources indicated that there are no immediate plans for him to play this season, but he is with them to get a little professional baseball experience. He seems to be very close with Tony Wolters, another promising young shortstop prospect for the Indians, and an excellent mentor for the new signee.
It must be nice for Lindor to know that because of his signing bonus and age, he has the luxury of developing over the next few years, and seeing if he can hone his game to a major league level. Not many people his age can claim the security he now has. However, he will not be sitting still, because now that the draft is behind him, the next goal will be playing in Cleveland.
Francisco Lindor Interview:
How did you first become interested in baseball?: The first time was with my Dad. He was the one who introduced me to the game of baseball. Also, my brother played the game. My brother and cousins played the game, so I definitely wanted to follow in their steps. That is how I became a baseball player.
Is it true that Ozzie Smith was your favorite player when you were growing up?: Yeah. He was definitely a great ball player. He is like a legend for most people, especially shortstops. That’s why I play so hard. He’s a great guy and I would like to be like him one day. I know I won’t be exactly like him, but I would to be as close as possible.
How did you first discover that the Indians were interested in you?: Most of the teams, they go to our games. They go around and give you letters and stuff like that. It just happens.
Was it difficult to wait until the very end of the August 15th signing deadline?: That’s just the way it goes. I’m happy I signed and am thankful. I’m with a great group of guys, so I’m really happy for that.
Now that you just signed, are you going to do anything with your friends or family to celebrate?: No, not really. Like I said, I’m really happy, and when I go back home, I’m probably going to have a little get-together, but that’s it, pretty much. I’m just thankful for everything that has been happening in my life.
**********************
You can follow me on Facebook by going to http://www.facebook.com/pages/The-Baseball-Historian/138174109591660 or follow me on Twitter @historianandrew
Posted by Andrew at 7:07 AM