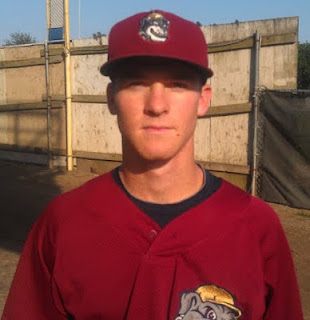 The Cleveland Indians may have young second baseman Jason Kipnis making his mark at the major league level, but he will soon have competition. That will come in the form of Joseph Wendle; a player who joined the organization from this past year’s draft and looks to be quite the keeper.

Wendle came from a small school, but has big talent. He was taken in the sixth round out of West Chester University in Pennsylvania; a division two school. As a senior, the left-handed hitter was named to the National Collegiate Baseball Writers' Association (NCBWA) first team all-America team and was the star of the eventual Division II national champions. He hit .399 with 12 home runs and 59 RBI in 56 games.

In addition to his ability with the bat, Wendle is also an excellent fielder. Coming from a small schoo, some wondered if his bat can keep up with his glove, but the Indians believe that won’t be a problem.

Wendle starred in his first professional season, after being assigned to Mahonging Valley in the New York-Penn League. He appeared in 61 games, hitting .327 with four home runs and 37 RBI. His adeptness at making contact was evidenced by the 25 strikeouts he had; an impressively low number for a player his age. More information about his statistics is available at: http://www.baseball-reference.com/minors/player.cgi?id=wendle000jos.

I chatted with Wendle before one of his games this past summer. I had not heard of him prior to that time, but have come to be extremely impressed by his talent. Check out what the Indians prospect had to say, as he answered some of my questions about his time in baseball.

What was your draft experience like?: My draft experience that week was actually pretty hectic. I had just come off winning a national title for division two in college baseball and two days later I was getting drafted. It was a little stressful, but also fun at the same time. I was glad to get the opportunity to play for Cleveland.

Did Cleveland notify you in advance that they were interested in you?: Yeah, a little bit. Not as much as some other teams maybe, but obviously they were trying to maybe keep it a little quiet. They just called me on draft day, the day it happened.

Is this your first season playing with wooden bats?: I’ve played in a lot of summer leagues. I’ve played in the New England Collegiate League, right up here, and also the Coastal Plain League, so those are all wood obviously. In school ball it’s all metal, so it’s probably split half and half with my at bats between metal and wood.

Is it difficult to transition from metal to wood?: I think it can be if you let it. There’s probably about a dozen at bats or so in the beginning where you’re still getting used to it. But I don’t think it’s too big of an adjustment for the better hitters.

What is one piece of advice you have been given since starting your pro career that has really helped you?: I think just the mental aspect of the game, trying to stay on the even keel and stay level. It’s a long season and you can’t get too up or down about one game because you probably have 75 more left in the season. So, staying even and keeping your emotions in check and being ready to play every day.

Besides the travel what is the most difficult part of playing professional baseball?: I guess accepting it as your job, not that anyone would think of it as work to come out here and play baseball. But yeah, just having it be your occupation is a little difficult to wrap your mind around for the first month or so. Once you get adjusted to the travel, like you said, just getting used to being at the ball park for five, six, seven, or eight hours of the day…

Since being drafted have you had much contact with those from the Cleveland organization?: Not really. We have the coordinators that come in and it was very good to meet all of them because most of them played in the big leagues. Hearing advice from them is very important. Right now we’re just focusing on this level and then we’ll head down to spring training and hopefully have another good experience.