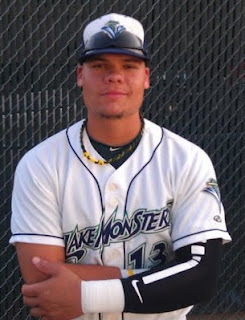 The Oakland A’s have a veritable collection of young catching prospects (Max Stassi, Petey Paramore, Nick Rickles and Derek Norris among others). However, the organization added another young backstop they are excited about to the fold last year, when they made Bruce Maxwell one of their top draft picks.

Maxwell is the rare left-handed hitting catcher that major league teams covet so highly. He parlayed an amazing college career, spent mostly in obscurity, into his high draft position.

A star at Sparkman High School in Alabama, Maxwell was a power-hitting first baseman with a lot of athleticism. He decided to attend college at Division III Birmingham-Southern College and ended up becoming the greatest player in the history of the Southern Collegiate Athletic Conference (SCAC).

His value was magnified by his conversion to catcher following his freshman year. Even with the switch, he kept up his torrid offensive production, while holding down the most demanding defensive position on the field.

Maxwell saved his best season for his junior year. He batted .471 with 15 home runs, 25 doubles, 48 RBI and 59 walks, as his team went 38-9 and came within one win of taking the 2012 Division III World Series. He also won a bevy of awards, including SCAC Offensive Player of the Year, Division III first-team, and the American Baseball Coaches Association Rawlings National Player of the Year.

Despite his small school pedigree, Oakland took Maxwell in the second round (62nd overall selection) in last year’s draft. His combination of athleticism and hitting ability as a catcher was too much to pass up.

Maxwell, who just turned 22, had a mixed bag of results during his first professional season. He appeared in 67 games with Oakland’s Arizona League team and the short-season Vermont Lake Monsters. He hit a combined .277 with no home runs and 26 RBI, while trying to get the hang of catching in the pros.

It will be interesting to see where Maxwell starts the 2013 season. His offensive potential should carry him as he works to hone his catching skills. If he can continue developing, he could become one of the A’s top prospects. The upcoming season will determine a lot about his future, so make sure to follow his progress closely.

How did you get into playing catcher?: I always did it when I was a kid, but when I got to college I played first base primarily. We needed a number two, and seeing how I bat left and throw right-handed, it was a great position for me to take up, and so my coaches converted me. Two years into it I got drafted as a catcher.

What was your draft experience like?: It was phenomenal, man. It was nothing like what my parents and my family had ever experienced. Getting a phone call from them telling you, ‘hey, we’re a professional baseball team and we just drafted you,’ it’s just phenomenal. I always dreamed about it as a kid, but it actually happened and was an unbelievable experience.

Coming from a Division III school, were you surprised you were drafted so highly, and how did you know Oakland was interested in you?: They called me 20 minutes before the draft started. I wasn’t projected to go until the third or fourth round. They called me beforehand, and when I was working at school it was always my goal. I didn’t expect to blow people’s minds like I did. I think I am the highest position player to ever get drafted out of Division three history. It was definitely good for me and my family.

What happened immediately after the draft; did you go to Oakland?: Actually, no I wasn’t. Since I was so far away I didn’t go up there. I think they only take the top first round. I was just at the house and everybody was calling me and coming over. We basically just had a big long get-together with friends and family.

Besides the travel, what has been the most difficult part of transitioning to professional baseball?: Every-day playing. You’ll hear a lot that this is more of a mental game than a physical game. Being prepared mentally, even though you might go oh-for-five, oh-for-fifteen, oh-for-thirty, you have to get back on that horse and get back on it every day. It’s hard and definitely a big transition, but it’s our job now. It’s fun and a different level of dedication.

What is one aspect of your game you are trying to work on the most?: Keeping my day-to-day approach. Right now I’ve gotten hot in the last week or two and need to keep being consistent with it. The biggest thing that separates big leaguers from minor leaguers is the mental grind and mental approach, and staying consistent day in and day out.

How difficult is it to deal with the scrutiny that comes with being a high draft pick?: It depends. It depends if you dedicate your time into buying into the hype that everybody is putting on you, or if you just let your game speak for itself. I was always raised to never to scrutinize anybody. When people ask me questions or want autographs, that’s fine. If people want to criticize me I’m going to let them because at the end of the day I am just going to play my game and let it speak for itself.