Out of the Park Baseball: Playing "What If?" With the Past, Present, and Future of Baseball

Here is a first for the Baseball Historian- a guest blog. It is written by Brad Cook, who runs marketing for the fantastic baseball history game, Out of the Park Baseball. Enjoy!

Thanks to Andrew for graciously offering me a guest post slot at The Baseball Historian. In the interest of full disclosure, I'm the PR and marketing guy for Out of the Park Developments, but I'm also a lifelong baseball fan with many fond memories of the sport. Those memories are what initially drew me to Out of the Park's flagship game, Out of the Park Baseball, before I even worked for them.

OOTP, as it's known, lets you indulge in your wildest "What if?" fantasies, even if "What if?" simply means letting you call the shots for your favorite team as the current season plays out. Sure, OOTP lets you take the reins of your favorite modern day club and unleash your inner GM and armchair manager, allowing you to haggle over trades, draft a fresh crop of talent for your farm system (complete with the top couple hundred or so real draftees), sign free agents, decide who deserves a contract extension, set your lineups and pitching rotation, make game-time decisions (when to steal, when to pinch-hit, and so forth), and much, much more. And you can play forward from there, taking your club decades or even centuries into the future as you guide its destiny.

However, this deep management game also lets you travel back through time and play forward from there, with real players showing up when they actually did and expansion teams and realignment appearing at the right times. Want the Red Sox to keep Babe Ruth? Sure, you can do that. Ever wonder how Lou Gehrig's career would have turned out had he not contracted a fatal disease? Easy. Curious how Mike Schmidt might have fared had your team drafted him? No problem -- just turn off the "players show up on their debut teams" option and he could be yours in the draft. 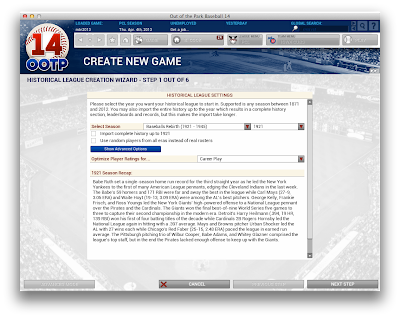 And when you turn on commissioner mode, you can travel to even more parallel baseball universes. Go back in time and add the DH before it appeared (if you must be a heretic). Bring about free agency sooner than it actually happened. Tweak the financial settings. Adjust the variables to make your league more hitter- or pitcher-friendly. Just about every feature is customizable, including the option to have real players show up randomly throughout history, rather than when they really did -- Pete Rose could appear in the 1920 draft while Ty Cobb debuts in 1950 and Sandy Koufax begins his career in 1980.

You can travel as far back as 1871 and play forward from there, with the likelihood that you could end up with a very different 2013 season by the time you reach the current day, depending on the settings you choose. OOTP also supports as many saved games as you want to create, so you can experiment with a variety of options to see what results they produce. 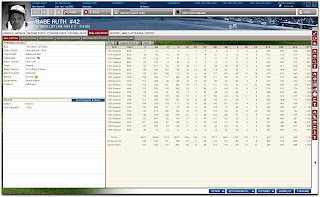 Baseball fans love to argue about whether Koufax could have struck out Ruth, or if Hank Aaron would have gotten the best of Three-Finger Brown, or if a certain team could have reversed its fortunes had its management not made some unfortunate decisions. While we'll never know the definitive answers to those questions, OOTP lets you get as close as possible to them.

Out of the Park Baseball 14 is the latest version in this long-running series, and it's available now for just $39.99, with all seasons and players included. It runs on PC/Mac/Linux. A simpler version is also available for just $4.99 for iOS (iPhone, iPad, iPod touch).