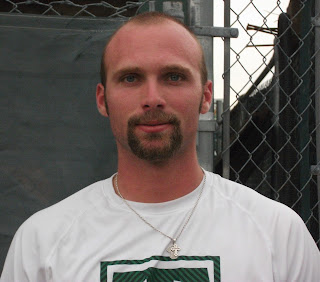 The movie Moneyball has brought the Oakland A’s methods of evaluating players to the mainstream. With position players in particular, Oakland covets those who have a high rate of getting on base and are defensively efficient. Nick Rickles qualifies in both of those categories, and if his 2011 season was any indication, he is well on his way to one day playing in Oakland.

Rickles, a right-handed hitting catcher, was drafted in the 14th round of the 2011 draft out of Stetson University. In his last collegiate season in 2011, he led the Stetson Hatters into the NCAA Regionals by hitting .353, with 12 home runs and 60 RBI, and performing his typical stellar defense. He was consistently good throughout his collegiate career, but not spectacular, which likely contributed to him flying a little beneath the radar.

Once he signed with Oakland and was assigned to the minor leagues, Rickles continued without missing a beat. In 47 total games (6 with Oakland’s Arizona rookie team and 41 with short season Vermont) he hit .310 with 2 home runs and 35 RBI. He also had an excellent .370 on base percentage and threw out 42% of stolen base attempts. Although there is no metric to measure such things, he was the most complete player I saw in the New York Penn League this year.

Rickles was a leader for a Vermont team that went to the playoffs for the first time in 15 years. His defining moment of the season came in the last regular season game, which Vermont had to win for any chance to make the playoffs. Late in the game, Rickles smartly went from first to an unoccupied third base on a sacrifice bunt, which led to him scoring the winning run and Vermont making the playoffs.

Just 21, Rickles is advanced in many facets of the game and looks to progress quickly through the Oakland system. He is the type of complete player the A’s look for, and it would not be a surprise to see him holding down their major league catcher position within the next few years.  I was able to chat with him towards the end of the season, and learned a little bit more about this rising prospect.

How did you become interested in baseball?: When I was a little kid, my Dad was a big baseball fan. He actually didn’t play it as much as I have, but he’s a big Yankee fan. So I grew up around baseball and lived in Florida all my life and he took me to Marlins’ games. As long as I can remember, maybe since I was six to eight years old, I’ve been playing.

Who was your favorite team and player growing up?: The Mets and David Wright. Like I said, my Dad was from New York, and we always butted heads on who we liked. I told him I would like a guy from his city, but the New York Mets are where it’s at.

What was the draft process like for you? How did you first find out that Oakland was interested in you?: Actually they were one of the teams that talked to me the least to tell the truth. I got a packet from them to fill out during mid-season. I didn’t talk to a scout. I got a text in the tenth round asking if I still wanted to sign and play professional baseball, and of course I did, so they picked me up in the fourteenth round, and the rest is history from there.

After you signed with Oakland, did you do anything to treat yourself or your family?: Well, I’ve had the same car since freshman year in high school. When my signing bonus came in I recently bought a Chevy Avalanche. It was my first big purchase for myself.

Prior to getting drafted, what was your favorite moment in baseball?: There was a game my last year in college at Florida State. It actually wasn’t something I did; it was a friend of mine. It was a tie ball game in the top of the ninth… actually, we were down one in the top of the ninth, and he hit a two run home run off their closer, to put us up one. We ended up going on to win that game in 11 innings, and it was one of the best baseball games I have ever been a part of. I’ll never forget his home run.

Off the field, what is the toughest part of adapting to being a professional player?: Just keeping your body in shape and making it a routine. We don’t necessarily start very early in the morning, so you got to get up early and get your day going. You don’t want to sleep until two o’clock in the afternoon and be lazy. You’ve got to keep your body in shape because playing every day is a tough thing, especially catching.

You get a day off every now and then, and you’ve got to get your sleep. Sleep is a big part of staying healthy and being ready for the game.