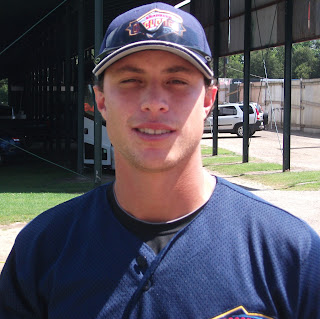 The past few years have been difficult for the New York Mets. The Fred Wilpon ownership debacle, expensive free agents like Jason Bay not panning out, and the departure of franchise stalwart Jose Reyes have all left fans reeling. The hope that the team can turn things around is largely built on their young player development. The Mets don’t currently have a deep system according to most baseball insiders, but they have had some luck in finding players in later rounds of the draft that they believe will become contributors to the big league team. One of those prospects is Travis Taijeron, who is perhaps the Mets minor league break-out player so far this year.
Taijeron is a right-handed outfielder, who was taken in the 18th round of the 2011 MLB draft out of Cal-Poly Pomona. A native of San Diego, he came to Pomona after junior college, setting their single season home runs record in 2010 with 16, and then matching it again the next year. He improved his draft stock over the last month of his college career, hitting a blistering .542 with a 1.000 slugging percentage.
After signing with the Mets Taijeron tore up short-season ball with the Brooklyn Cyclones, hitting .299 with 9 home runs and 44 RBI in 56 games. He was promoted Savannah to begin this year, but performed so well that he was sent up to Class-A Advanced St. Lucie, where he has continued playing well. In 87 total games so far this season he has hit .279, with 16 home runs and 54 RBI. More information about his statistics is available at  http://www.milb.com/milb/stats/stats.jsp?pos=&sid=t507&t=p_pbp&pid=607369.
With the Mets having one of the least productive outfields in baseball this year, a prospect like Taijeron could have a perfect opportunity if he keeps up his rapid pace of development. I had a chance to chat with him last season when he was with Brooklyn, and found him to be the perfect blend of easy going and hard working. He shared some insight about his experiences in baseball, so keep reading and find out a little bit more about this surging Mets prospect.
Travis Taijeron Interview:
How did you first become interested in baseball?: When I was probably five-years old. I just always loved playing sports. My dad always brought me out. I played many sports; soccer and everything. Baseball took my interest when I got to high school. I just started to excel in baseball.
Did you have a favorite team or player when you were growing up?: The San Diego Padres. I’m a Padres’ fan. My favorite team that the Padres had was the ’98 team; that was the year they went to the World Series, and they had a bunch of really cool guys. Caminiti was one of my favorite players.
How did you first find out that the Mets were interested in you?: I basically had talked to teams since I was in high school and through college. I didn’t really know. I had been to workouts and things like that for teams, but I didn’t know what teams were interested in me.
After you signed, did you do anything special for yourself or your family?: Nah man, I’m a senior, so I didn’t sign for very much money. I’m still working; I’m still an average dude going out there. I still work construction in the off-season.
What is life like in the minor leagues?: I’m having a great time in the minor leagues. I’m still playing baseball and that’s all I can really ask for. I’ve always loved baseball, so I’m having a great time.
If baseball doesn’t pan out for some reason, what do you think you will end up doing?: I really have no idea. I just take it, and this is what I am doing right now. I want to throw all of my focus on baseball and see what happens.
**********************
You can follow me on Facebook by going to http://www.facebook.com/pages/The-Baseball-Historian/138174109591660 or follow me on Twitter @historianandrew
Posted by Andrew at 7:15 AM