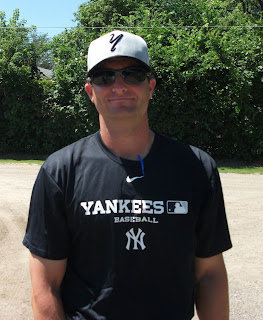 There is a lot of pressure on baseball players who are chosen in the first few rounds of the draft. The expectations for them to succeed are much higher than other players, not only because they have typically signed for more money, but also because they have more name recognition. The stress of making it is not only to fulfill their personal expectations, but to also meet those of front office staff and fans who have identified them as part of the Major League team’s future.
Danny Borrell was drafted in the second round of the 2000 draft by the New York Yankees. Before that he was a talented enigma in college with Wake Forest, serving as a utility player. He pitched as a starter and reliever, played some first base, and also served as the team designated hitter. In 1999 he hit 20 home runs for the Demon Deacons, but also had some success on the mound. When New York drafted him, they believed that his future was on the pitching mound and had him retire his bat for good.
Because he had only limited experience, Borrell was a project when he started in the minors. However, he was so talented, that his potential was obvious. In 2002, just a few years after he was drafted, he posted a combined 13-5 record and 2.32 ERA between High A and Double A. His most impressive statistic was that he only allowed 5 home runs in 167 innings that year. The reluctance to allow home runs was something that actually lasted his entire career, as he only gave up a total 52 long balls in 675 innings.
Unfortunately, once Borrell reached the upper levels of the minor leagues and was within sniffing distance of the Big Leagues, injuries started to kick in. He continued pitching until 2008, but was never able to stay healthy enough to realize the great promise he had flashed. He came oh so close to pitching in the Major Leagues, but like many players, he never got the chance because he couldn’t stay healthy. He ended up going 39-35 with a 3.49 ERA over 9 minor league seasons. More information about his career statistics can be found at http://www.baseballreference.com/minors/player.cgi?id=borrel001dan.
Although he did not pan out as a player, the Yankees never gave up on Borrell. He pitched his last two professional seasons with the Oakland A’s organization, but upon retiring, decided to get into coaching. The Yankees brought him back and are currently utilizing him as the pitching coach for the Staten Island Yankees. Recently I was able to speak to several pitchers on that staff, and they were all unanimous in agreeing about what a great influence Borrell has been on them in helping them develop as players, new to professional baseball. I love meeting guys like Borrell, who may not have had things work out the way he wanted, but ended up making something out of it anyways.
Danny Borrell Interview:
How did you first become interested in baseball?: I think it was just a product of my Mom and Dad both being athletes growing up.  They never pushed me into doing anything; it’s just one those where I was young and probably saw it on tv and just started doing it.
Did you have a favorite team and player growing up?: Chicago Cubs and Ryne Sandberg. I used to watch them all the time. That’s all we had. We had WGN in North Carolina, so I grew up watching the Cubs.
Was there any particular pitcher you modeled yourself after or did you mainly play as a hitter growing up?: Yeah, you know what, I did both growing up. But I think I was a little more successful as a hitter than a pitcher until I got to pro ball. I really didn’t model myself after anybody, I just liked watching it. I probably took little bits from everybody.
What pitches did you throw?: I was fast, curve, and change. But I was a big project I would venture to say. Coming out of college I wasn’t really a pitcher; more of a thrower. My pitching coaches at the time did a good job refining what I had.
When you signed after the draft, did you do anything special for you and your family?: Not really. I knew that money wouldn’t last too long. Obviously I was very fortunate to be a second rounder. I bought a little truck, but that was it.
If you could do anything differently from your playing career, what would that be?: Yeah, not get hurt. You know what, I wouldn’t change a thing. I think I went about it the right way. I think I worked hard, but I just got hurt a lot throughout my career. I spent most of my time rehabbing, the last five years and after a while it just got old. You know, physically, it wasn’t the issue. I just got tired of rehabbing.
Posted by Andrew at 7:10 AM