Nothing represents Father’s Day better than the relationship a father and son has with baseball.  This tradition has been around as long as the game itself. For this special day I had the opportunity to explore this connection with George Case III, the son of former Major League star outfielder, George Case.

George Washington Case played Major League baseball from 1937 to 1947; each season with the Washington Senators, with the exception of 1946, which he spent with the Cleveland Indians- before the Senators realized their mistake and traded to get him back. He was well on his way to a possible Hall of Fame career before his playing days were unfortunately ended by injury. In his 11 seasons the right-handed throwing and hitting Case hit .282 in 1226 games with 21 home runs, 377 RBI. He also stole 349 bases, leading the American League in that category six times, including each year during 1939-1943. His six times leading the league in stolen bases tied a record held by Ty Cobb at the time, but was subsequently broken by Luis Aparicio. You can find more on Case’s career statistics by going to http://www.baseball-reference.com/players/c/casege01.shtml .

An interesting episode in Case’s career happened in 1946 with the Cleveland Indians when team owner Bill Veeck arranged a one hundred yard race with Olympic star Jesse Owens. Owens won by a couple of steps, but the event showed  not only the type of fun that Veeck could come up with, but also how fast Case was, even towards the end of his career. 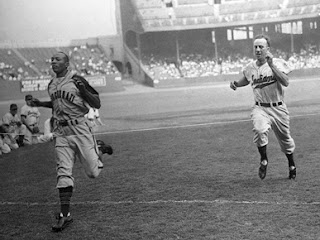 After retiring in 1947 due to spinal issues, Case worked in the sporting goods business and as a baseball coach and instructor. He passed away in 1989, but instilled a deep love of baseball in his son that continues to be shared to this day.

I was fortunate enough to be able to ask his son George Case III some questions about his Dad, baseball, and the connection they shared. With today being Father’s Day, I couldn’t think of a better time to share this interview. I hope you enjoy reading this as much as I did putting it together!

“I'll try and answer your questions - by the way, Father's Day is a very special time for all of us remembering our fathers and for me, having a father who was also a major league baseball player, my remembrances of my dad are somewhat unique!”

How involved did your father keep you in his baseball career, i.e. bringing you to games, etc…?: I was very involved as a youngster although in my very early days as a baby - I obviously don't remember except that my mother told me she used to take me to day games at Griffith Stadium from the time I was about 6 months old (I was born in September 1940 so in the spring of '41, I would probably have been taken to my first Washington Senators games.  As I grew older I do remember taking the trolley with my mother to Griffith Stadium and then going into the clubhouse after the game to be with my father - the Washington Senators clubhouse was right next to the player's parking lot at Griffith Stadium so I would often walk out of the clubhouse with my dad, meet my mother at the car and then going home.

Then in 1961, when my dad was re-united with Mickey Vernon and Sid Hudson with the "expansion" Senators, I had a chance to work out with the ballclub when they opened at Griffith Stadium because the new DC Stadium (now RFK Stadium) was not ready.  That obviously was a special thrill - wearing a Senators uniform and working out on the same field where my dad and so many others had actually played - Ruth, Gehrig, Walter Johnson, Ty Cobb, Sam Rice, Joe Judge, Goose Goslin, DiMaggio, Williams. Killebrew and so many others - it was VERY SPECIAL!

What kind of reception did you get from other children who knew your father was a player?: The reception of my friends was great - they all knew my dad was a ballplayer and the fact that I played ball and had all the equipment meant that I was always included in the games!  Of course, I also played so that was important to me and to my friends - true story - in 1953, Mickey Vernon and his wife Libby who were very close family friends were visiting with my mom and dad in the off season - Mickey had just won the AL batting championship and all of the kids in the neighborhood were lined up outside our front door to get Mickey's autograph - I never knew I had so many friends!

Did you play a lot of baseball or consider a professional career?: I did play a lot of baseball from the time I was 11 years old in Little League.  I was always big, played two years of Little League, two years of Babe Ruth League, three years of HS and three years of American Legion baseball.  I also played baseball in college at Rutgers University - one year for my dad.  I also played a lot of basketball in HS and college - I considered a professional baseball career because i really loved the game - however my dad thought the life of a minor league ballplayer in those days was very difficult (to say the least) and that I should consider a career outside of baseball (that was very good advice) as I'm not certain I had the skill level required for the major leagues - for 40 years I was involved in the business side of sports so that was my involvement - I had been in the athletic footwear business and my dad's name and reputation was very helpful in "opening doors."

Who was your favorite player other than your father?: My favorite player, other than my dad, had to be Mickey Vernon and then Sid Hudson - two VERY CLOSE lifetime friends of our family.  Obviously the fact that my dad had played against and knew Lou Gehrig, Ted Williams, Joe DiMaggio and many other Hall of Famer's meant that I was always interested in their names - and later Harmon Killebrew, because he played with the Senators and later my dad was a coach on the '68 Twins when Harmon was a star in Minnesota.  I always followed the Senators/Twins because of the Washington, DC connection!

What is your favorite baseball memory?: I had so many wonderful baseball memories over the years but I'll always remember going to Cooperstown with my father for the induction of his Senators manager, Bucky Harris, into the Hall of Fame.  We were the guests of the Harris family and I can remember sitting at the hotel in Cooperstown with my dad, I believe Bill Dickey and several other Hall of Famer's - having lunch and listening to all of the stories - just a great memory!

How did your father’s teammates treat you when you were at the park?: Of course, for my younger days, I was much too young to remember - as I grew older the players were my "family" - "Uncle" Mickey Vernon, Sid Hudson, Dutch Leonard, Cecil Travis, Stan Spence, Ray Scarborough, Walter Masterson, Buddy Myer, Buddy Lewis, Al Evans, Rick Ferrell - they always treated me wonderfully and often came to my parents house in the off-season - I can remember sitting on Mickey Vernon's lap as he sang to me!  And later in life I had the opportunity to meet so many others over the years - Bob Feller, Ted Williams, Eddie Yost, Roy Sievers, Eldon Auker, Andy Seminick, Chuck Hinton, Bill Werber, Tom Ferrick, Al Brancato, Harmon Killebrew - Babe Dahlgren's grandson - Matt, Walter Johnson's grandson - Hank Thomas, Hank Greenberg's son Steve - so many great players and families - all because of baseball!

Your father was “discovered” by Connie Mack; did you ever meet him and if so, what did you think of him?: My dad was "discovered" by Connie Mack in 1936 - I do not remember ever meeting Mr. Mack although I may have.  My dad always had the greatest respect for Connie Mack and Mr. Mack often visited Trenton when my dad's half-brother Cliff Case owned the Trenton Senators - I have seen photos of Connie Mack at Dunn Field in Trenton but I do not remember ever meeting him - of course I did meet Clark Griffith many times - my dad was one of Mr. Griffith's favorite players and Connie Mack and Clark Griffith were lifetime baseball friends and I believe were instrumental in the formation of the American League in 1903 - I'm not a baseball historian so I may be mistaken but I think that is correct!

How did you feel when your father stopped playing?: It was a very difficult time for my dad when he had to retire because of an injury - he was only 31 at the time - obviously I don't remember a lot of the details, but I do know I missed going to spring training - train rides to Florida in "sleeper cars" and visiting places like Ross Allen's Snake Farm and Coral Gables and the "glass bottom" boats were special treats to a youngster!   My dad did open a sporting goods store in Trenton following his retirement and I spent a lot of time at the store - then when my dad became the baseball coach at Rutgers University in 1950 - Rutgers became a special part of my life and I had the good fortune to play for my dad my sophomore year at Rutgers before my father returned to the major leagues with the "expansion" Washington Senators in 1961.

What did your father think about fans and autograph requests?: My dad loved baseball and understood the importance of fans - after a good game, no problem with autographs - after a bad game many players were not in the best mood to sign although back then - no one paid for autographs so players never ever thought about the potential value of their autograph!  I do remember often sitting with my father at our dining room table as he signed autographs for fans - "fan mail" - many times with money enclosed - my father was flattered, would sign and then return the money - I can remember him going to baseball card shows and never even charging the show promoter for his expenses - that's just the way he was!

What are your thoughts on baseball today?: First of all, I love baseball - always have - always will!  Today's players are so much bigger, stronger, faster and more skilled HOWEVER in my opinion, many are lacking the fundamentals - throwing to the wrong base, missing the cut-off man, not moving up runners, outfielders catching the ball off the wrong side of their body before making a throw - to name just a few.  I am not a fan of today's game - I guess I'm a traditionalist - I do  not like the DH, pitch counts, pants down to the shoe tops, jewelry, agents and the HUGE amount of money involved (by the way, if I was a player today and someone offered me that crazy kind of money, how could you say no!) - I understand it is a different game and a different time but that is my opinion and that is the reason and my way of honoring my father's memory, that I created my website with the help of my son and grandson - www.timelessbaseball.com - to give fans a chance to see baseball the way the game used to be and to see actual COLOR footage in the DVD "Around The League 1939-46" - the COLOR footage of actual "home movies" taken by my father during his major league career - with his personal narration provide later before his passing in 1989.