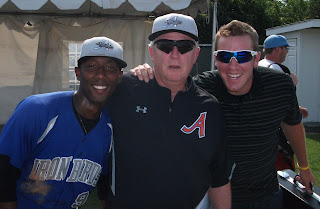 The recent tragic passing of Mike Flanagan served as a sad reminder of the great Baltimore teams of the late 1970’s and early 1980’s. Looking at their recent results, it is hard to fathom how far the once proud franchise has fallen over the past couple of decades. The term dynasty should not be thrown around lightly, but those Baltimore teams fit the definition.

Another of the constants on those Baltimore teams was left-handed starter Scott McGregor. Although he was initially taken by the Yankees in the 1st round of the 1972 MLB draft, a trade allowed McGregor to play his entire 13-year (1976-1988) major league career with the Orioles. He became one of the best pitchers in their history, and was part of some of the greatest moments in their heyday.

McGregor was amazingly consistent during his career, putting together nine consecutive seasons where he had double digits in wins. His best seasons came in 1980 when he won 20 games, and in 1983, when he won 18 games, and helped lead the team to a World Series victory over the Philadelphia Phillies, pitching a shutout in the fifth and deciding game.

In 356 career games (309 starts), McGregor went 138-108 with a 3.99 ERA. He was successful despite not being a strikeout pitcher. He only surpassed 100 once, and struck out only 904 in 2140.2 career innings. He was also an extremely effective post season pitcher. He only had 6 total starts with a 3-3 record, but had three complete games, two shutouts, and a 1.63 ERA in 49.2 playoff innings.  More information about McGregor’s career statistics is available at http://www.baseball-reference.com/players/m/mcgresc01.shtml.

McGregor is currently a pitching coach for the Aberdeen Ironbirds, a low-level minor league affiliate of the Orioles. The team is also owned by the Ripken brothers, both former teammates of McGregor. Although there is a long way to go, he hopes that some of the young players he coaches will help restore Baltimore back to its previous glory.

Who was your favorite team and player when you were growing up?: I grew up in Los Angeles, watching the Dodgers and the Angels. Probably as a kid, Sandy Koufax, Don Drysdale were pitching back then; Maury Wills… They were pretty good guys.

You were drafted by the Yankees; what was that process like?: I was in high school and had a great career there. They told me I was probably going to get drafted in the first round. I guess whatever day that was in June, I was in second period, in science class, and my high school coach came walking in, and he goes, ‘Okay, you’ve got to guess. Who drafted you?’ I said, ‘I don’t know. Cincinnati? (laughing)’ I though Cincinnati was going to draft me because I played for their Cincinnati guys. They had me in their scout league my sophomore and junior years, during the summer, after the season.

I was just playing; still playing legion ball. It’s not like it used to be, when you got all these big promos, talking to people, and pre-deals. Back then, you were just drafted, sign with them, and went to Ft. Lauderdale. Played four years in the minor leagues with them, and got traded over here in ’76. I was fortunate enough to be with a real good team and organization at that time.

Did you have a favorite moment from your playing career?: First and foremost, getting called up in ’76, and being in the Big Leagues was pretty impressive. And then obviously, being with that group of guys and being as competitive as we were for years was… just the whole career was great. The last couple of years we weren’t very good.

And then obviously, in ’83, the last game of the World Series; to be able to clinch that was just a dream come true.

Were the 1983 Orioles the best team you ever played on?: Well that whole crew, we were together from ’78; well really ’77 all the way through ’83-‘84. So that whole group was together, and it was just a culmination of all those years, and the frustrations of ’79, getting there and losing it. Then in ’80, we won 100 games and came in second place to the Yankees. ’81 was a strike year and that got all confused. In ’82 we went down to the last day of the season. That was the same team pretty much for all those years, so that was a great group of guys that stayed together and played hard for six or seven years. It was very fortunate to get two chances, and win the second one.

Who would you consider the unsung hero on that ’83 team?: Well I think a lot of them were. Richie Dauer had a great 4th game up there, and obviously Rick Dempsey ended up being the MVP. He wasn’t really unsung, but wasn’t really the guy you looked to when you had Eddie Murray and Cal Ripken. So probably those two.

What was Earl Weaver like as a manager?: He was very fiery, feisty, and hated to lose, the first day of spring training, all the way through. He made you play the game right, and we probably didn’t like him too much then, but we get along great now.