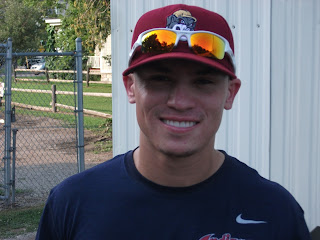 The Cleveland Indians surprised a lot of people at the beginning of the season with the way they started out of the gate. However, as the season progressed it became apparent that while the team has a good young base, there are still areas where they need to get better. One of the primary ways they hope to accomplish this is by cultivating more young talent in their minor league organization. Shrewd drafting has put them in a position where their farm system is dotted with highly regarded prospects and more help is on the way.

One of the players that the Indians are most excited about is shortstop Tony Wolters. The left-handed hitter just completed his second professional season, playing in 69 games with the Mahoning Valley Scrappers. He was drafted in the 3rd round of the 2010 MLB draft, and many believe that the Indians got a steal with that pick. Wolters has been described as a “gamer” and a “baseball rat,” all terms of endearment, and is the type of player that fans love to watch.

At 5’10 and 165 pounds, Wolters is slight of build, but already possesses excellent fielding skills, above average speed, and a projectable bat that many feel will be best suited for the number two position in a batting order. Scouts consider him to have an advanced bat already, and he also has more pop than one might think. He was originally planning on attending the University of San Diego, but changed his mind after the Indians made him an contract offer he couldn’t refuse.

Wolters signed late in 2010, so he only appeared in a handful of games in the rookie instructional league that year. This year, he played a short-season schedule and validated the expectations the Indians have in him. He hit .292 with 10 doubles, 3 triples, a home run, and 20 RBI. He also contributed 19 stolen bases in 23 attempts, and his 30 walks were impressive for a player his age. More information about Wolters’ career statistics is available online at http://www.baseball-reference.com/minors/player.cgi?id=wolter001ton.

The Indians may have one of their best current players in Asdrubal Cabrera manning shortstop, but that won’t stop them from developing Wolters. By the time Wolters is ready for the major leagues, Cabrera will likely have been moved back to his more natural position of second base, or perhaps been deemed too expensive for the rebuilding Cleveland. Whatever it takes, it will be worth having someone like Wolters on the roster if he continues to develop into the player so many people believe he will become.

How much were you into hockey?: It was my first sport, and I loved it. I loved the contact, but I like baseball better. I feel like it comes more natural. I was playing with all my friends and I didn’t know a lot of people in ice hockey.

Who was your favorite baseball team and player when you were growing up?: I always watched the Padres. My Dad always took me to Qualcom to watch the Padres, and always watched Tony Gwynn. I went to the last game he played. He was one of the guys I watched a lot.

How did you first find out that Cleveland was interested in you?: The second day of the draft when I found out they drafted me. I had never talked with them.

What did you do to celebrate after you signed?: I got a truck, and that was mostly it. I got my Mom something; my Dad something; my sister something.

So far, what has been the toughest thing to adapt to off the field, as a professional player?: The Indians make it so nice. They’re really first class about everything; where we stay, what we eat, how we train. It’s hard being away from home, missing my family and everything. I think one of the keys is keeping in touch, and I’ve been talking with them every day. The Indians make it perfect. They’re first class.