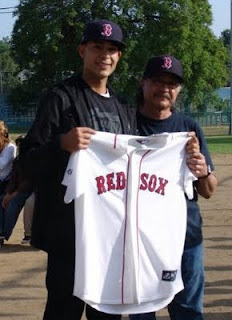 The extraordinary run of the Boston Red Sox has continued this year, with their superior won/loss record, and another excellent haul of prospects they obtained in this year’s draft. The team’s willingness to invest in their farm system is a major reason why they became one of the best teams in baseball over the past decade.


One of the most unique and promising players taken in the 2011 draft was right-handed pitcher Noe Ramirez, out of Cal State Fullerton. Boston grabbed him in the 4th round earlier this summer. He became a top-flight draft prospect because of his work in college. Over three seasons, he had a 29-6 record, including an 8-4 mark with a 1.69 ERA this season- his junior year.  During that time, he also starred on Team USA.


Ramirez ‘s fastball tops out around 90 MPH, and he has an excellent changeup, and feel for pitching. Most scouts have him as one of the likeliest pitchers from this past draft to make the majors because of his skill, makeup, and intangibles. He shouldn’t require a great deal of development to be ready for the major leagues. Ready-made pitchers like Ramirez are always appreciated in baseball.


In addition to being a great player, Ramirez is an even better person. It was quite surprising to hear back from him during the midst of his signing with Boston and getting assigned to his first professional team in Lowell. Not only did he respond, but I also got some of the most thoughtful answers I have ever received.


Ramirez has also overcome great odds to get where he is today. Blair Angula at www.espn.com recently published an excellent piece on him, which is available at http://sports.espn.go.com/los-angeles/news/story?id=6611449. I hope that my interview with Ramirez allows you to get to know him a little better.


The Red Sox immediately improved their organization when they selected and signed Ramirez. Teams cannot have enough players of his caliber and makeup. Now that he has begun his professional career, you should definitely be rooting for him. I know I will.


How did you first become interested in baseball?: When I was around 3 years old. My Pops was the one who tossed me my first baseball. I started throwing that ball as hard as I can and the ball would absolutely fly. Same, when I got a bat in my hands. I thought baseball was the greatest thing ever.

What pitches do you throw?: I throw a 2 seam, change-up, slider. I have a curveball too but don't really throw it. Maybe I will start throwing it again.

Did you have a favorite team and player growing up? What made them your favorite?: Dodgers. I live 5 minutes from Dodger stadium, so there is Dodger blue all around the area. But as of late I've seen people in the housing projects my family lives in sporting Boston gear. Pretty cool to see so many people supporting. As for my favorite player growing up, it was Ken Griffey Jr. I've sported #24 my whole life because of him. His swagger and way he played the game was godly for me as a kid.

How did you choose Cal-State Fullerton?: Choosing Cal State Fullerton was a no-brainer. They are a powerhouse program, who are known for grinders and mentally strong players. I thought it was a perfect fit for me. The coaching staff and teammates were a lot of fun to be around with too.

How did you find out that the Red Sox were interested in you?: I actually didn't know the Red Sox were interested until draft day. I only talked to an area scout back in the fall of 2010, just like I did with most teams. I think the only two teams that didn't contact me at all were my hometown teams, the Dodgers and Angels, which was a bit surprising, but I believe everything happens for a reason, and I couldn't be happier to be part of the amazing Red Sox organization.

What is the attention from fans, press, etc like now that you are a top baseball prospect?: The attention I've been getting is crazy, especially from people back home because of where I was born and raised, where a kid from East Los Angeles getting drafted rarely happens. People tell me I'm a role model for the kids of East Los Angeles, and what I've accomplished so far shows kids that anything is possible. Hearing things like that gives me an unbelievable feeling inside. Kids would come up to me as if I was this big star and tell me I'm their inspiration. It's surreal. People from across the country have contacted me as well telling me they really enjoyed watching me pitch when they had an opportunity to. I never thought there were so many people who were fans of mine. It’s pretty cool.

What are some of your interests away from baseball?: I'm a pretty simple guy. I love being around friends and family. I absolutely love eating and eat like a mad-man. Many people probably wouldn't think so because of my skinny frame but I get after it. I just hope it doesn't catch up to me too much later.
I've always wanted to travel overseas and visit a numerous amount of countries but never had the opportunity to do so. Hopefully I can do that soon.


I love going to concerts of all sorts too, especially Reggae and underground hip hop. I've been a huge fan of reggae since I was a kid, Reggae that goes as far back as the 60's, same with hip hop. I'm a huge music fan.
What is the next non-baseball related accomplishment you hope to attain?: My oldest brother, oldest sister, and myself have talked about starting a charity in the Housing Projects I grew up in, for the kids of the neighborhood. When baseball comes around, kids show up with no cleats, gloves, and bats because they can't afford them. They can't get a good start at pursuing their dream without equipment. I want to make sure they have the best possible gear. They all deserve it.
**********************
You can follow me on Facebook by going to http://www.facebook.com/pages/The-Baseball-Historian/138174109591660 or follow me on Twitter @RedSoxFanNum1
Posted by Andrew at 7:10 AM