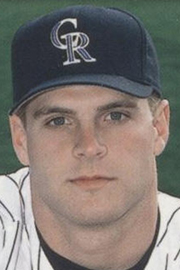 When the Colorado Rockies first started play in 1993, they began from the very bottom, having to build their franchise out of expansion draft picks, free agents, and a new farm system. A good farm system is important for any new team, and the Rockies immediately started to stock their own with prospects, hoping that some would develop into stars.

1995 was a pivotal year for the Rockies when it came to building for the future. In the first round of the draft that year, they took University of Tennessee first baseman Todd Helton, who has since gone on to have a Hall of Fame worthy career in Colorado. In the second round, the Rockies drafted their first major catching prospect in Ben Petrick. He was a high school star from Oregon, who played multiple sports, but settled on baseball. He was incredibly athletic for a catcher, and was a player the Rockies were very excited about.

Petrick immediately showed a powerful bat in the minor leagues, and as he got older, the average also started to appear. In 1999 he hit .311 with 23 home runs in the minors, and was promoted to the Rockies during September call-ups. He continued his torrid pace in 19 major league games, hitting .323 with 4 home runs.

Over the next several seasons Petrick shuttled back and forth between the Rockies and the minors. Despite having some good production, he was never able to wrest away the full time starting job with the big club. Finally, in 2003 he was traded mid-year to the Detroit Tigers, in what would prove to be his final major league season.

Over the course of his five seasons in the Majors, Petrick hit .257 with 27 home runs and 94 RBI, in 240 games. In addition to catching, he was also used occasionally in the outfield, to take advantage of his superior athletic ability. More information about his career statistics is available at http://www.baseball-reference.com/players/p/petribe01.shtml.

After Petrick retired, he disclosed that he had been diagnosed with Parkinson’s disease following the 1999 season. As he continued playing, he managed his illness with medication, but he eventually decided that he was not going to be able to continue to compete at the same level he wanted, so he decided to hang it up. He has since done a lot of work raising the public awareness level of Parkinson’s. Additionally, he has turned to coaching as a way to continue in sports and give something back to the kids. In addition to what he did in Colorado, Petrick will also always be remembered for being one of the earliest major Rockie prospects.

How did you first become interested in baseball, and what sports did you play growing up in Oregon?: My dad was a college football and wrestling coach, when I was born, and ended up being an high school athletic director for 24 years so as soon as I could hold a ball, I had one in my hands. He encouraged me to try every sport. So as a child I played soccer, football, baseball, track, and wrestling. By the time I was in high school I had narrowed it down to football, basketball, and baseball.

Who was your favorite player growing up and why?: Don Mattingly. I was a Yankee fan because my dad liked them, so Mattingly was a natural fit. He played the game hard and wasn't big into promoting himself. He was just a humble, hardnosed player.

What was the draft process and choosing an agent like?: It was pretty neat to get as much attention as I did by major league scouts. However, it was time consuming with sit down visits with them, and the psych test that they have you do. Overall a positive experience. Same with finding an agent. More or less an interview process and finding the right fit.

What is the one thing you found you needed to do or improve upon to make the Majors?: My mental approach to the daily ups and downs is what needed the most improvement. When I made the mental adjustment as far as not taking one day into the next, I made huge strides.

Who was the biggest character you ever played with or against?: Denny Neagle.

What is your favorite moment from your playing career?: First game back from after Sept. 11, 2001.

Is there anything you would do differently if you could do your playing career over?: I would be more assertive and dive into the game planning more.

What have you done since you stopped playing?: I have given private baseball lessons, gone back to school, coached high school football and baseball, helped start a website called http://faithinthegame.tumblr.com/.

What do you think about the current catchers blocking home plate controversy?: I think it's bogus. Guys have been going after catchers for years; it's part of the game. If the catcher gets into a good position to receive the baseball prior to collision, he cuts down on the chances of him getting hurt.