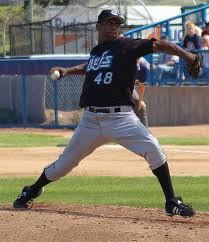 Pat Mahomes never intended to be a pitcher. As a teenager he had a talent for hitting, and it was an injury to a high school teammate that got him on the mound. When he threw his first pitches, Mahomes changed the course of his baseball career forever. The right-hander threw so hard that it overrode the success he had as a hitter, and his baseball destiny set out on to a new path.

Mahomes grew up in Lindale Texas, and by the time he graduated from high school, he had established himself as a prospect that interested many teams. The Minnesota Twins decided that he was intriguing enough that they selected him in the 6th round of the 1988 MLB draft. Despite having numerous offers to play collegiate sports, Mahomes chose to sign and begin his professional career.

Unlike many minor league players, Mahomes developed quickly and was promoted to a new rank every season after he joined the Minnesota franchise. He got double digits in wins in 1989, 1990, and 1991, and became the team’s top pitching prospect. In addition to his excellent win totals he was also very frugal with the home runs, allowing only 29 total in his first four seasons.

In 1992 the Twins were coming off a World Series victory from the previous season, and were expecting to make another postseason run. However, the back end up their starting rotation was in disarray, and Mahomes was brought up to try and shore up the spot. He appeared in 14 games, with 13 of them being starts. He had a 3-4 record, with a 5.04 ERA. Unfortunately the Twins finished in second place, just outside of the playoff picture.

For the next several seasons, Mahomes bounced around between the Twins’ rotation and bullpen, flashing promise, like the 9-5 record he had in 1994. But he never fully gained his footing. In August, 1996 he was traded to the Boston Red Sox, setting off a trend that led to him pitching for 21 minor, major, and Japanese league teams over the next 14 years, before he ultimately retired after the 2009 season.

Some of Mahomes’ career highlights include his 1999 season with the New York Mets, where he went 8-0 out of the bullpen, and helped them into the playoffs. Additionally, in a 1992 game for the Twins against the Oakland A’s, he struck out 10 batters in five innings, marking his career high for punch outs in a single game.

In total, Mahomes had a 42-39 record, with a 5.47 ERA over 308 games in an 11 year major league career. He also verified that he was once a good positional prospect, with the .256 career batting average he posted in 43 at bats. You can find more information about his career statistics by going to http://www.baseball-reference.com/players/m/mahompa01.shtml.

It can be difficult for a baseball player to gain momentum when they are constantly switching teams. Focusing is not the easiest thing to accomplish if there is no sense of stability. While Pat Mahomes was the definition of a journeyman pitcher, he also had the talent and results to stay in professional baseball for over 20 years. I would call that a great career.

How did you first become interested in baseball?: When I was very young, one of my cousins was a pretty good baseball player, and I kind of looked up to him, and I started t-ball like everybody else did. I pretty much played from four years old, and just fell in love with it right from the beginning.

You were drafted in the 6th round by the Twins, what was that process like?: It’s funny, my junior year, my American Legion team, we won State for the third time. I was 12 for 13 in the State Championship and got the MVP. The next year teams started coming out, and I was going to be drafted, but drafted as an outfielder.

My senior year, one of our star pitchers, he ended up hurting his arm, and I happened to come into a game when scouts were there to watch me play outfield. They clocked me pitching, and I was throwing like 93. The funniest thing about it is the Twins was the team that drafted me, and I think the Twins were really the only team that I didn’t throw to.

Were you happy to end up with Minnesota?: I had signed to go play basketball at Arkansas, and you know, I always wanted to play baseball. I mean I was happy that I just got drafted. The team, it didn’t really matter, I just loved to play a game, basketball and baseball. Once I started looking at it and thinking about what way I could go further, you know, this baseball thing was probably going to be the best bet.

You played baseball and basketball at Lindale and won 3 State championships?: No, no, My American Legion team was 3 championships. I played football, basketball, and baseball, and I was All-State in all three of them.

Did you pick up breaking pitches when you reached professional ball?: Yeah, when I first started playing pro I got a curveball, but the pitch that really got me over the top was when I got to Double-A. My pitching coach… showed me a slider. That was the pitch that made me go straight to the Big Leagues.

Did you have a favorite coach or manager, or somebody who was most influential?: Well my favorite manager, a guy that I played for in the minor leagues, was a guy by the name of Scotty Ullger. He’s the third base coach for the Twins now, but in his day he was always the biggest believer in me. He was the guy that made me believe that I could play in the Big Leagues.

What it your favorite moment from your career?: I would say getting to the World Series in 2000, the Subway Series, that’s probably the biggest moment. For me personally, my favorite game was Game 6 in 1999 when we played the Braves in the National League championship. I mean, that was a classic baseball game. I got to come in, in the first inning, and I pitched four innings and kept us in it, and we ended up taking a lead, but we ended up losing it in the end, but that was probably the best game that I was ever involved in.

How special was it for you to have grown up a Mets fan, and then in your first season with them, you went 8-0 and helped them reach the playoffs?: Oh yeah, it was very exciting for me. I went over to Japan for a year and a half, and then when I came back I decided whatever opportunity I got, I was going to relish it. The Mets saying they wanted me to play for them, I mean what better stage is there to pitch in than New York?

Did you enjoy your time with the Red Sox (my favorite team)?: When I first went over there in ’96 I loved that Kevin Kennedy was the manager. That was the year of a terrible start and we came all the way back. We had a chance to make the playoffs and were right there until the end with the Yankees. Some of the most tight ballgames I’ve ever been in. The Red Sox fans are very passionate about their team, and being able to pitch in games that meant so much, I loved it.

What was your experience playing in Japan like?: Different. I had a good time. We had a great time actually in ’98; we won the Japanese World Series over there. I played for the Yokohama Baystars, and it was great to experience a different culture.

You last pitched in the Majors in 2003, but continued pitching professionally until 2009. Did you continue pitching because you hoped to get back to the Big Leagues, or just because you loved the game?: I know I could still pitch if I got an opportunity to get back up to the Big Leagues. I played you know, with that teams and had really had good years. Unfortunately at that time I wasn’t making a lot of money, but I was making too much money for a long reliever. I wasn’t really a starter, so I never got called back up. It was time for me to get home and coach my oldest son, and that’s what I’m doing now.

Is there anything about your career that you would do differently?: Probably listen a little more. I was very young when I got to the Big Leagues. I was 21 years old. I should have listened a little more, and I won’t say respect the game more, but should have had a little more respect for things that were going on.

What was the strangest thing you ever saw on a baseball field?: Probably my first year with the Mets, I think it was my first year with the Mets. The game I was pitching in, Bobby Valentine got kicked out of the game and he went back up to the clubhouse and put on some eye glasses and a mustache, and put on a t0shirt and came back and sat in the dugout. That was probably the strangest thing I ever saw when I was playing ball.

From your experience, did coaches who were ejected from games typically leave like they were supposed to?: They usually leave, but they sit up in the runway, and never in a place where you can see them.

I love Bobby Valentine. A lot of people don’t like him, you know, you either hate him or like him. But he always had a lot of confidence in me.

Was it difficult to transition from playing pro ball to being a “citizen?”: I miss it sometimes. I work out in the off season and know that I could still pitch at that level. But on the other hand, I have three boys that are playing ball. Being able to coach them, and team them some of the stuff that wasn’t taught to me is kind of a blessing to me.
My 15 year old son is a pretty good athlete. He just won Newcomer of the Year and All-East Texas as a freshman.