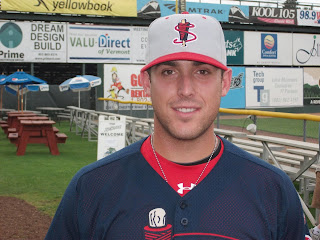 Boston Red Sox farmhand Travis Shaw may facially resemble his father Jeff, but that is where the comparisons end between the two when it comes to baseball. Travis is playing the 2011 season with the Lowell Spinners in the New York Penn League, and is a blossoming slugger at third base. His game couldn’t be more different from that of his father, but that is okay because they each followed the area of the game where they excelled the most.
Jeff Shaw was a two time All-Star reliever, who saved 203 games over a 12 year career while playing for a number of teams, including the Reds and Dodgers. He was born in Washington Courthouse, Ohio, a small town of about 14,000, and raised his own family there. Although he didn’t throw particularly hard, he had an excellent split -fingered fastball, and one of the best work ethics in the game. He also involved his children the game and that has rubbed off on at least one of them.
Travis Shaw discovered that his baseball talent lay in hitting rather than pitching. A big (6’4, 225 pound) left handed hitter, Travis has enjoyed success in baseball wherever he has played. He helped lead the Washington Courthouse High School to three South Central Ohio league titles, and then became a star player in college for Kent State. He was taken by Boston in the 9th round of the 2011 draft, and has not disappointed the organization so far, with his excellent production.
Through 37 games with Lowell this season, Travis has hit .273 with 6 home runs and 22 RBI. Perhaps even more impressive has been his 30 walks, showing that he has an excellent batting eye for a player of his age and development. More information on his statistics can be found at http://web.minorleaguebaseball.com/milb/stats/stats.jsp?pos=3B&sid=milb&t=p_pbp&pid=543768.
It looks like Travis is going to be another in a long line of excellent hitting prospects that the Red Sox have acquired over the past few years. Kevin Youkilis is currently starring in Boston at the hot corner, but is on the wrong side of thirty, and the Red Sox will be seeking a replacement for him in the coming years. If Travis continues to produce and develop as he has so far this season, he will certainly be in the conversation to fill that spot. If he ends up making his way to Boston, it will be good to have another Shaw in the major leagues.
Travis Shaw Interview:
What was it like growing up with a father in the Major Leagues?: It was pretty special. I went to the field every day with him. I got to see a lifestyle; see what the everyday life was like. I was always around the field, out there for BP, I bat-boyed a few times when he was in L.A. It was a pretty cool experience when I was younger.
Do you think that experience had a pretty big impact on preparing you for the professional game?: Yeah, especially for my Dad just talking to me all the time as I grew up, because he retired pretty early. He was there through my high school career and he was able to just guide me through the whole college process and now as a professional.
Were any of your father’s teammate influential for you?: No, not really. He was sort of the only one around where we lived that played professional baseball. We were friends with a lot of guys, but they weren’t from Ohio, from around where we lived. So it was pretty much him that was the only one that was influential on my career.
What was the draft process like for you?: This year was a little different. We were coming back from Regionals, so I was actually on the highway, which took me away from it, which I was perfectly fine with. I wasn’t sitting there watching it and worrying about it. It was sort of more laid back this year.
When I got drafted out of high school I was kind of paying attention to it because I knew I was going to get picked. I knew it was going to be late, but it was still kind of cool to watch it. And this year I didn’t watch it.
Did you do anything special for yourself after you signed with the Red Sox?: No, not really. We had a party before I left; just family and friends. Close family and friends actually, came over and had a cookout, but that was about it.
********************
You can follow me on Facebook by going to http://www.facebook.com/pages/The-Baseball-Historian/138174109591660 or follow me on Twitter @historianandrew
Posted by Andrew at 7:03 AM