Swen Huijer: The Cook Who Became a Pitcher 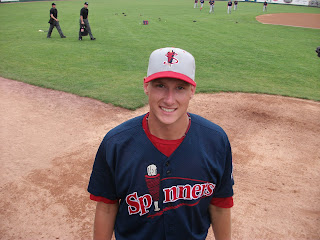 Baseball is not that popular in the Netherlands. Other than when the national team plays in the WBC, it is just another sport in a country dominated by soccer. Therefore any Dutch player who is any good is bound to stand out more in their home country, particularly if they stand 6’9 like Swen Huijer.


Huijer is one of the more recent Dutch baseball exports to play professional baseball. The lanky right-handed pitcher was signed as a free agent in 2008 by the Boston Red Sox. He had pitched for the Netherlands’ junior national team, but never seriously considered a professional career. Instead, Huijer was focused on becoming a chef, and was completing culinary school at the time he was contacted by Boston.


Given his general lack of baseball experience, the Red Sox took it slowly with Huijer during his first few years in the minor leagues. This season he is pitching for the Lowell Spinner in the New York Penn League, and has gone 1-2 with a 2.45 ERA over 25.2 innings, in 9 games out of the bullpen. Despite limited innings he has pitched well at every stop so far in his minor league career. More information about his statistics can be found at http://web.minorleaguebaseball.com/milb/stats/stats.jsp?pos=P&sid=t558&t=p_pbp&pid=544517.


His fastball currently tops out around the high 80’s, but at 20 years-old, Huijer is young enough, and has enough length to grow into his repertoire. It remains to be seen if he will project as a starter or reliever, but the Red Sox have gambled that he has a chance to turn into a useful piece for their franchise down the road. While he is liable serve up something delicious to eat, if all goes well, don’t expect Swen Huijer to serve up many base hits.


How did you first become interested in baseball?: It started off with my Dad. My Dad played baseball for a beer team when I was a kid in the Netherlands. When I was I think about four years old, I started going to the night games with him. Walking around with his bat, and trying to swing his bat when I was like four feet tall. From there on, I just loved the game so much that I started playing, and my Dad started coaching. From there it kept growing.


How big is baseball in the Netherlands?: It’s not very big. Our number one sport is soccer, obviously. And it will never get as big. It’s growing, especially with all the attention we get from international tournaments; the WBC, the World Cups, but it will never be as big as it is in the United States.


What was it like getting signed by the Red Sox? How did you first know they were interested in you?: Well, I played for the Dutch National Junior Team. From there on, we got a tournament in Italy. I pitched down there against Italy and somehow one of my pitching coaches was a scout for the Red Sox. I never knew about that, the whole program that we played, for four months… never noticed anything. After that, he called me and was like, ‘Listen up, we want you on our team and we got a contract down here for you.’


First, I thought he was kidding, and it ended up that the contract was there in two weeks, and I signed after that.


Did you do anything special for yourself or your family after you signed?: No, not really. I had to finish school. I was doing chef school… culinary school, so I had to finish that first. After that, I actually got on a plane five days after that. That’s where I got my degree; that school. After that I didn’t have much time to celebrate.


How has your experience been in the United States and playing in the minor leagues?: It’s been absolutely fantastic. I’ve had so much fun. I spent the last three years in Fort Myers in rookie ball. Finally got the call after extended spring this year to go up to Lowell, and it’s been a whole different experience. You get fans. You get night games. You travel on the road for a couple of days. It’s just awesome.