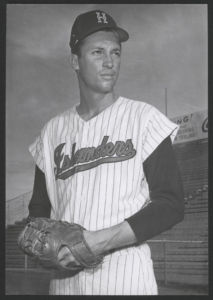 In the 1950’s and 1960’s baseball was in flux, with teams spreading geographically across the United States. This changed the method of team travel from trains to airplanes, in order to make up the greater distances. This was before most Americans flew on a regular basis, and as can be imagined, some players did not like taking to the skies. In fact, Jim Duckworth almost lost his baseball career because of his fear of flying.
Duckworth was a big right-handed pitcher, who was signed by the Brooklyn Dodgers in 1957. He pitched well in the minors in 1957, going 10-2, but struggled so badly in 1958 that he was left unprotected, and was taken by the Cincinnati Reds in the minor league draft. He never pitched for the Reds either, and in 1962 was taken by the Washington Senators in the Rule 5 draft.
The pitching-poor Senators finally gave Duckworth his shot at the major leagues. He shuttled back and forth between their bullpen, the starting rotation, and minor leagues between 1963 and 1966. In late July, 1966, he was traded to the Kansas City Athletics for Diego Segui, and finished his final major league season.
Over the course of his major league career, Duckworth had a 7-25 record, with a 5.26 ERA over 97 games. He was always a good strikeout pitcher, with 220 over 267 career innings. Some of career highlights include beating the New York Yankees for his first major league win, and having more than 10 strikeouts in three out of his five starts during September, 1965. More information on his career statistics is available at http://www.baseball-reference.com/players/d/duckwji01.shtml.
Getting back to Duckworth’s fear of flying, it became such a problem for him, that he almost lost his job. In 1964 he missed a series against the Angels in California because he refused to fly with the team, so great was his apprehension about getting on a plane. He was fined three games pay, but fortunately did not receive any harsher punishment than that. He was able to overcome his fears so that the episode did not repeat itself.
I recently had an opportunity to write Duckworth and ask him some questions about his career. As always, it was interesting to see the answers.
Jim Duckworth Questionnaire:
If you could do anything differently from your playing career, what would that be?: Go to college first.
What was the strangest thing you ever saw as a player on the baseball diamond?: Me getting hit in the head with the ball thrown by the home plate umpire.
Who was your favorite coach or manager?: George Case.
What was travel like between games?: Ugh!
What have you done since you retired from playing?: After baseball, I had a career with the Highway State Patrol, teaching, and am now a wildlife and nature photographer.
Posted by Andrew at 7:05 AM