Trevor May- The "K" Machine 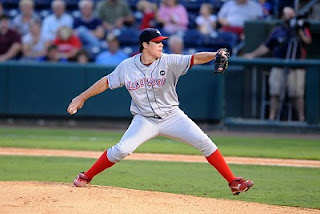 Currently there is little doubt that the Philadelphia Phillies have the best starting rotation in all the major leagues. Led by Roy Halladay, Cliff Lee, Cole Hamels, and Roy Oswalt, the Philadelphia staff is deep and very experience. Despite the dominance of their pitchers, the Phillies are constantly looking to stock their system with quality arms, and have other intriguing pitchers coming up through the minor leagues. Trevor May is one of these prospects, and is on track to eventually explode on to the scene in Philadelphia within the next year or two.

May actually became part of the Philadelphia franchise before any of their “Big Four” were acquired. The big right-handed pitcher was taken in the 4th round of the 2008 MLB draft out of high school in Washington. His big frame, complimented by a big, heavy fastball in the 93-95 mph range, makes him a very desirable prospect. He also throws an impressive curveball and a changeup which many scouts feel has improved greatly since his first season.
Ever since joining the professional ranks, May has posted big strikeout numbers, and has only added to his status as a major prospect. This year alone, he already has 178 strikeouts in 131.1 innings. For his minor league career he has rung up 466 batters in only 355.2 innings. For more information on May’s statistics, please visit http://www.baseball-reference.com/minors/player.cgi?id=may---001tre.
Winning is something that seems to follow May wherever he goes. His teams have won titles in each of his first three professional seasons, and his current team Clearwater is currently in first place- with an eye on another title.
It is a telling sign that May is still with the Phillies organization. Over the past few seasons they have made big trades for the likes of Cliff Lee and Hunter Pence, which required a great deal of their minor league talent be shipped off as compensation. Not including May in those deals is a testament to how highly he is regarded in Philadelphia.
The talent May flashes on the mound, combined with his winning pedigree, could be another superstar pitcher for the Phillies. While Halladay, Lee, Hamels, and Oswalt are at the top of their respective games right now, they will eventually slow down, and it will be up to a pitcher like Trevor May to come in, take the torch from them, and carry on the legacy of excellence in the Philadelphia starting rotation.
Trevor May Interview:
Who was your favorite team and player growing up and why?: Nolan Ryan, the most dominant pitcher of all time. I loved his mound presence and everything he brought to the game. Also, Randy Johnson.

What coach or manager has been most influential on you so far?: Dave Lundquist has been my pitching coach for two years. He's worked with me through a lot, and I can attribute much of my success to his teaching.

How difficult is it to adjust to being a top baseball prospect and being approached by fans, journalists, etc...?: Not at all. I enjoy interacting with the fans and journalists. Prospect status doesn't really mean much in terms of performance in my opinion. I just try and stay on the same path no matter what the status. One game at a time.
What has been your favorite highlight from your career so far?: Pitching in and winning two playoffs with the Lakewood Blueclaws. We play hard every day to win. Nothing is better than winning it all.
What is life typically life traveling between minor league games? What do you all do to stave off boredom?: In the Florida State League travel is easy, the longest road trip is 3 hours. In the SAL our shortest was 4 hours. So it becomes a grind to say the least. I read A LOT, watch movies and television, and play cards. That pretty much sums up all of the off time we have. Haha.

What do you think you would be doing for a career if you were not playing baseball?: I’d definitely being in my senior year at University of Washington pursuing a business degree; possibly studying to become an entrepreneur.
**********************
You can follow me on Facebook by going to http://www.facebook.com/pages/The-Baseball-Historian/138174109591660 or follow me on Twitter @RedSoxFanNum1
Posted by Andrew at 8:06 AM