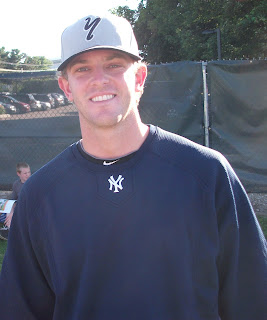 The Vanderbilt Commodores have built a rich tradition of excellent college baseball, highlighted by their knack for developing good pitching. In recent years they have produced the likes of David Price, Sonny Gray, and Mike Minor. Their success has made their pitchers all the more coveted come draft time. One of their more recent draftees was Caleb Cotham, taken by the New York Yankees in the 5th round of the 2009 MLB draft.

Cotham was a three time all-district selection, and two time captain of his high school team in Mt. Juliet, Tennessee. He drew attention from the major leagues after striking out 84 in 79 sophomore innings at Vanderbilt, and producing a 0.00 ERA in the 2009 Cape Cod League. It was also because of his excellent fastball that can reach 92-95 mph, and his promise of having good secondary pitches. His out pitch may be his slider, which has natural bite. The Yankees thought enough of Cotham to sign him at well above the slot for his draft position.

Unfortunately, injuries have prevented Cotham from taking off in the way that many expected. Now in his third season of minor league play, he has only been able to pitch in a total of 15 games during that time. However, when he has played, he has shown why he is so highly regarded, punching out 44 batters in 30 innings. For more information on his minor league statistics, you can go to http://www.baseball-reference.com/minors/player.cgi?id=cotham001cal.

This season Cotham has been as healthy as he has ever been during his minor league career. The Yankees have him pitching out of the bullpen with Staten Island in the New York Penn League, but that is likely a precautionary measure to ease him back into regular use. Although his progress has been stunted because of the injuries, Cotham has the ability to not only bounce back, but to also surge through the minor league system. If that happens, it will not come as a surprise.

How did you first become interested in baseball?: It was the kind of thing that I quote, unquote ‘played my whole life.’ My Dad got me in to it when I was six years old, and I never really got burned out. I just loved the game and kept with it.

Did you have a favorite team or player growing up?: Yeah, I grew up an Atlanta Braves fan. I grew up in the Terry Pendleton, Jeff Blauser era. I’ve got a lot of heroes from that team. You can’t go wrong with their pitching staff in the mid ‘90’s.

What was the draft process like for you? You were taken in the 5th round by the Yankees?: Yeah, the fifth round. It was just a deal where I pitched in college and did well enough to get some looks, and took advantage of some opportunities. It was a fun process. Thank God I was able to be drafted and get into a great organization.

After you signed, did you do anything crazy to treat yourself or your family?: No, just put it all away. Trying to be smart, you know. It could be any day that this is taken away from me, so I don’t want to be dumb with it.

One is one thing you have encountered that has surprised you as a professional baseball player, that you had never thought of before you were signed?: I had a pretty good feel for it coming in. I guess just the amount of dedication it takes to make it to the major leagues. You’ve got to want it, you’ve got to want it every day. You can’t take days off, mentally or physically. I think that’s what separates a lot of guys from the guys that make it. They want it bad enough in the right ways. I think just watching how people work, watching their work ethics, has been a big eye opener, and has added to my game a little bit.