Bill Stein was an excellent player in the Major Leagues, but what I will remember him best for was having one of the finest mustaches in the history of the game. Varying from neatly trimmed to the slightly bushy walrus, Stein’s lip duster always stood out to me when I was growing up and came across one of his baseball cards. 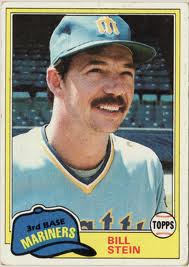