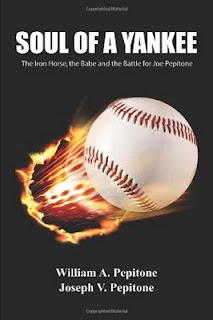 Sometimes in life you just decide to go for it, even if that means stopping suddenly and completely reversing directions. It is something that takes a degree of determination and just a little bit of craziness, but if it pays off, it is completely worth it. Billy Pepitone, the nephew of Yankee legend Joe Pepitone decided to do that, and his deviation from the path of life has been taking him to many amazing places.

Billy did not pursue the family business of baseball, but instead was a Police Officer in New York City for twenty years. It was a good career and one to be proud of, but like many of us, there was something missing for Billy. Once he retired from the force, he decided to pursue one of his longtime passions- writing. The result was a book he wrote with his brother Joe, called “Soul of a Yankee: The Iron Horse, the Babe, and the Battle for Joe Pepitone.” His pursuit of writing speaks to me as someone with similar aspirations and also getting a similarly later start.

The official Facebook page(http://www.facebook.com/pages/Soul-of-A-Yankee/130687966982400?sk=info) for “Soul of a Yankee” describes the book in the following way:

Joe Pepitone had it all. Unquestionable God given talent, light up a room charisma, and an ego the size of Brooklyn. Yet over the course of a lifetime, he would squander away a potential Hall of Fame career, several marriages, and countless opportunities to make things right. Then, on one rainy night in a crime ridden section of his old neighborhood, rock bottom hit him in the face like a 100 mile per hour fastball; the wrong place, the wrong car, and perhaps the last wrong turn of his life.

Having had the book thrown at him by an outraged judge, Joe found himself alone in a dingy cell inside a New York State prison. His pinstripes had been replaced by jail stripes, the roar of Yankee Stadium now a distant memory. The pain was too much to take; he clutched his chest, fell to the ground and closed his eyes.

Suddenly, he was woken by the vision of a man, an apparition who claimed to know the path to redemption. Intrigued, and with nothing left to lose, Joe rides along on a trip that will take him back through the peaks and valleys of his wild life, in a last ditch effort to right the wrongs and save his soul. They will confront many obstacles along the way, including the one barrier that will threaten Joe’s eternal existence; the greatest player in the history of the game.

A rivalry dating back sixty years has come full circle, and now each man has something to lose…in the battle for Joe Pepitone’s soul. This science fiction/fantasy tale centered on Billy’s uncle is one of the more unique books concerning baseball to ever be written.

Soul of a Yankee can be purchased in many places, including http://www.amazon.com/gp/offer-listing/0557749417/ref=dp_olp_new?ie=UTF8&condition=new .

As someone as unique and with such varied interests in writing, I felt it was in my best interest to speak with Billy Pepitone if at all possible. Fortunately for me, he immediately responded to my request and gave me a little insight into his career, his experience with his uncle Joe, and some tips on how to get started in the writing game. Showing that he is not content with one accomplishing one goal, Billy is continuing to work on his dreams. His most recent project is producing, writing, and acting in the film Stuck in the Middle, which has been garnering some notice in the entertainment world. More information on this movie is available at http://www.imdb.com/title/tt1833878/ .

How did you first become interested in baseball and writing?: My Uncle Joe played during the 60’s and 70’s, primarily for the Yankees with stops in Chicago, Houston, Atlanta and even Japan. My Dad also played minor league ball for the Giants, so I guess baseball was in my blood. As far as writing, I didn’t realize how much I enjoyed writing till my high school English professor told me I had a certain ‘knack’ for storytelling. He gave me a lot of confidence and I’ve never forgotten what he taught me.

Did your uncle Joe have you involved at all when he was a player (like going to games, etc…)?: My earliest memories go back to when he was with the Chicago Cubs. My family was living in Chicago, and I remember going to Wrigley Field and meeting Ernie Banks and Ferguson Jenkins. I must have been 5 at the time, and I remember Ernie asking me who my favorite baseball player was, and my reply was Tommie Agee of the Mets. To this day I’m not sure why I said that! In 1981, while my Uncle was a special instructor for the Yankees, he took me to spring training. I was 13 years old, sitting in the clubhouse with Graig Nettles, Ron Guidry, Dave Winfield, and other heroes of my childhood. Needless to say I had some pretty cool stories to tell when I went back to school.

How did you break into writing?: Around 2003 I decided to take my ideas and daydreams, put them into words and on paper. I wrote a crime drama, sent it to a publisher, and received mixed reviews. Initially I was disappointed; however, I decided to keep writing until I improved as a writer and a ‘storyteller.’

What advice would you give to a relative novice of writing, coming to the game late (I see that you originally were a Police Officer)?: Yes, I was a New York City Police Officer for twenty years, so I joined the game late as well. My advice is that it is never too late to do something you truly enjoy. For the novice writer my advice is to write….and write and write. Just keep putting thoughts to paper. And most importantly, ‘write what you know.’ It’s difficult to write about something you have never experienced or have little knowledge of. Write about your life experiences, places and people you have encountered, your hobbies or passions. You’ll see how the story just flows.

Why did you change careers midstream?: Actually I didn’t really pursue writing as a full time career until I retired from the Police Department. Once I did retire, there were no excuses. It was time to chase my dream of becoming a writer.

How did you come up with the concept for “Soul of a Yankee?”: I had just finished reading a book titled ‘Luckiest Man: The Life and Death of Lou Gehrig’ which was written by Jonathan Eig. Probably the most moving and emotional book I had ever read. Afterwards I thought to myself, wow, Lou Gehrig and Joe Pepitone are polar opposites in so many ways, it would make an interesting story if we could just put them in the same setting. I bounced the idea off my brother Joseph, an extremely talented writer who has won two Emmy Awards along with several other awards for writing and producing, and we came up with a story that is part reality and part fiction. It’s funny, it’s sad, and it just works.

What are some good ways for a writer to get noticed?: The best way to get noticed is to get your story out there. Get it into as many hands as possible. If you are self-publishing, a route I highly recommend, utilize social media to your advantage. Facebook and Twitter are powerful tools if used in the correct manner.

Do plan to write any other baseball related items?: Yes, without a doubt. Right now my brother and I are tied up with a couple of screenplays we’ve written, but we plan to revisit some ideas and projects we’ve put on hold. There are still a lot of great baseball stories left to be told.

Is there any other advice you could think of for someone like me?: Don’t ever get discouraged. If the publishing world isn’t ready to accept your work, self-publishing is a great alternative for novice writers. If you are willing to do the leg work, you can put together a terrific project that will rival any product the publishing houses put out. It just depends on your desire and resiliency.

What other projects are you currently working on?: My brother Joseph and I recently formed a production company, Diamond Jesus Productions, and our first feature film ‘Stuck in the Middle’ premiered two weeks ago at the Hoboken NJ Film Festival to excellent reviews. We are currently in pre-production of our next film, and we have several literary works ready to go as well. So between the screenwriting and the novels we are keeping quite busy, which is a good thing!
Posted by Andrew at 7:12 AM