Drafted in the fourth round of the 1986 draft by the Mets. Kip Gross had a number of promising years in the minor leagues before making his Major League debut in 1990. This came with the Cincinnati Reds because the previous year, he had been part of a deal that had brought John Franco to the Mets while sending Randy Myers over to the Reds. Ironically his first Major League strikeout came in 1990 against his former team, when he whiffed Howard Johnson. His first win also came against them, in 1991, when he beat David Cone.
After the 1991 season, Gross was traded to the Los Angeles Dodgers along with Eric Davis in exchange for Tim Belcher and John Wetteland. He spent the 1992 and 1993 seasons alternating between the Dodgers and their minor league affiliate, Albuquerque. He began 1994 with Albuquerque, but on May 10th was purchased by the Nippon Ham Fighters of the Japan Pacific League.
Gross was a star in Japan, leading the league in pitching wins in both 1995 and 1996. He returned to the United States in 1998 due to needing surgery, and to this day has the legacy of the best non-Japanese pitcher to ever play in the land of the rising sun.
Gross fought back from his injury and pitched briefly in 1999 with the Red Sox and 2000 with the Astros. He spent one final season in 2001 in the minors before calling it a career. He had alternated between starting and relieving during his career, posting an 80-60 record with a 3.54 ERA in 289 minor league games, including 147 starts. At that Major League level he went 7 and 8 with a 3.90 ERA in 73 games, with 12 starts. More information about the statistics of his career can be found at http://www.baseball-reference.com/players/g/grosski01.shtml .
Earlier this week I was able to interview Mr. Gross and he provided a lot of great insight into his playing days and thoughts on baseball. 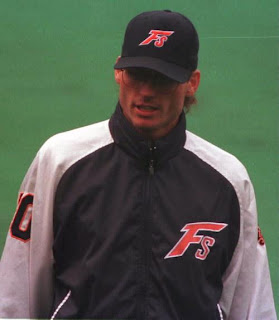 How did you first become interested in baseball?: Since I can remember I always loved the game of baseball. I grew up in Gering Nebraska and became a Royals fan and a huge George Brett fan as well. If there was ever an idol he was it to me. I used to watch any game I could and if I couldn't watch them play I'd find a radio. I think twice, my family went on family vacations in the Kansas City area during the summer and then is when I was able to see the Royals play and it was just more fuel to my fire as wanting to play.
Very interesting was back in 1991 when with the Reds, we had a spring training game against the Royals in Baseball City, the weather wasn't the greatest that day but I was scheduled to pitch. Yes, George Brett was playing that day and it was him that was due up 1st in the bottom half of the inning that I was going out to pitch. Because the rain was starting to come down just a bit more, Lou Piniella tells me to go out on the mound and slip a few times so the umps call the game. Lou was my favorite manager I ever had but I wasn't going to go out there and not get my opportunity against George Brett. Anyhow, Lou talked with the umps while I was warming up and I never got my chance.

Just being a kid is what made me love baseball. Playing 500 in the street, whiffle ball in the yard, and I used to love seeing how far I could throw a ball.
What was it like getting drafted and signed by the Mets in 1986?: I remember it well. I was at my parent’s home in Gering sleeping on the couch when Mets scout Marty Harvat called and gave me the news. It was a short conversation but one that I'll remember forever. Signing was a bit different. Although I knew I was going to sign, I had always wanted to play in the Alaskan League and I was given that opportunity that summer. I went to Alaska and our team ended up winning the National Championship in Wichita that summer. It was fun and I got a chance to play against great competition which I think was a stepping stone from the University of Nebraska. The night we won the Championship, I called Marty Harvat who was at the tournament and told him I'd sign. They had almost doubled their original offer in the process.
Who was your favorite coach or manager?: I had a lot of great coaches and managers and each and every one of them taught me something about the game of baseball, both amateur and professional. But my favorite MLB Manger was Lou Piniella. I could probably list every coach or manager by the way.
Who was the biggest character you ever played with or against?:Winter ball in Puerto Rico, Rafael Mantalvo. I think he's coaching today. He was signed when he was 14 years old and he was a fun guy to be around. During rain delays and whatever, he would entertain the entire team with WWE or playing the water bottle for music.
I also have to give huge credit to Roger McDowell, my old roomie for 2 years. He knew how to keep a clubhouse loose. I remember in spring training we used to go to the store every day and put together a care package for someone in the club house. Lasorda and the coaches used to come in each morning to go over the days plan and soon enough a timer or alarm would begin to beep in a players locker. Usually it was new player or someone that had a bad play the day before. Lasorda would always play along and make sure the player would open the bag with the timer in it. Example, one older player had black hair coloring in his bag because he would somehow go from grey ends to none periodically. Another was we put a fart machine under Tommy's chair and Roger would press the button periodically. This went on every morning.
What was your favorite moment from your playing career?: I had many. In 1988 my team, the St. Lucie Mets, we won the Florida State title. In 1990, although I didn't pitch in the playoffs or series, we, the Reds, won the World Series and I still have my ring. Playing 5 years in Japan was also a huge deal for me. I always told myself that if I ever got the chance to play over there that I would go under the right circumstances. My daughter Harley, was born in Tokyo.
What was your favorite stadium or city to play in?: Stadium was Dodger stadium. City was Cincinnati.
Who was the toughest hitter that you faced?: This is probably crazy but Steve Carter, who never played in the big leagues not only owned me but hit a double every time I faced him. Steve never got a shot and I still don't understand why. He hit .289 in 6 AAA seasons on teams with legitimate stadiums. Buffalo, Iowa, Toledo, Indy, Tucson. Big league player wasn't a certain player because all of the hitters are good there. Barry Bonds sticks out though.
Is there anything you would do differently if you could do your playing career over?: Hind sight is 20/20
How was playing in Japan; what did you think of the language and culture?: I loved playing over there because at the time I was getting a lot of time between AAA and MLB and by going over there I was pretty much assured staying on one team. I never once was shipped to the minor leagues while I was over there which is pretty rare in itself.

The language was a problem mostly because I was in Tokyo and most everyone there speaks English. When on the road I we had interpreters who went anywhere they were needed. I have to give huge props to Matt Winters and Rick Schu who were on my team when I went over and they made it real nice and easy for me. I will say this, for about a month, I went from the stadium to my apartment and did nothing.
What was the strangest thing you ever saw on the field while playing?: The list is too long to list them all. Just last year I was managing an Independent team in the Golden League and during our home opener the right field fence fell in during the game.

While with the Reds in Montreal, we were having a 9th inning rally and we were one hit away from tying the game up, runners on 1st and 2nd nobody out when I think Chris Sabo hits a bullet, one hopper to Tim Wallach's right side. Eli, makes the catch, steps on third base, throws to 2nd and they turn it to 1st for a game ending Triple play. I think we lose 4-2. I'm not sure how many times that has happened.
What have you done since you stopped playing?: Hung out with my family mainly and coaching my 2 kids. Last year I managed an independent team in Canada. I would like to get into coaching professionally with one of 3 A ball teams in the area where I could live at home and be a pitching coach.
How many autograph requests do you typically get?: I get 1-2 every week in the mail.
Posted by Andrew at 9:01 AM