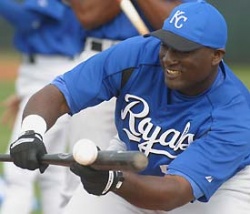 What I remember most about watching Calvin Pickering play is always thinking that he must be so intimidating for whichever pitcher was facing him. Generously listed at 6-5, 255 pounds, Pickering was one of the most physically imposing players to ever play the game. He was a threat to hit a home run every time he stepped to the plate, but unfortunately never received the opportunity to play every day in the Major Leagues.

When he was drafted in the 35th round in 1995 by the Orioles, Pickering was an intriguing pick because of his size and power potential. Once he started in the minors, he did not disappoint. Playing in 15 games with the Orioles’ Gulf Coast League team in 1995, he hit a blistering .500 with 22 RBI. In each subsequent year, he hit over .300 with substantial power, before getting called up and making his debut with the Orioles against the Angels on September 12, 1998. In doing so he became just the 10th player in history from the Virgin Islands to play in the Majors. He struck out in all three of his at bats in his first game against knuckleballer Steve Sparks, but just a week later picked up his first hit, a home run against David Cone and the Yankees.

For whatever reason, Pickering never stuck as a full time player in the Majors. He did have a penchant for striking out, but he would have also been a lock for 30-plus home runs if given a full slate of at bats over the course of a season. He bounced around, playing 1998 and 1999 with Baltimore, 2001 with the Reds and Red Sox, and 2004 and 2005 with the Royals. In 95 career Major league games, Pickering hit .223 with 14 home runs and 45 RBI.

When the Red Sox picked up Pickering in 2001 I recall being excited about Pickering for two reasons. First, we were just getting over the Jose Offerman first base experience, and secondly, because I salivated at thinking about what Pickering would do to the Green Monster. I am still surprised they only gave him 17 games there. Even so, he hit .280 with 3 home runs. Over the next couple of seasons, the Sox trotted out the likes of Tony Clark and Brian Daubach at first base. Those are guys I admired, but certainly were not exempt from some competition from Pickering.

Pickering was much more of an impact player in the minors. Over 1115 career games, he hit .298 with 246 home runs and 862 RBI. Displaying a patient eye, he also had an impressive .410 career on base percentage. He last played in the minor leagues in 2005, but did have two seasons of independent league ball in 2007 and 2008. More information on the statistics of his career can be found at http://www.baseball-reference.com/players/p/pickeca01.shtml .

Recently I had the opportunity to ask Calvin Pickering some questions about his career over email and received some great in-depth answers which I have posted below.

How did you first become interested in baseball?: Well MY GRANDFATHER was a big baseball fan back in the VIRGIN ISLANDS. I use to watch baseball on tv with him when I was 3 years old. MY mother always use to say that when baseball was on tv they couldn’t change the channel because I use to catch a fit and start screaming so they would have to turn it back to the game. We use to always watch the CUBS and BRAVES games on tv those was the only two teams that was always showing ON TV in the islands at the time. Also my uncles use to play ball at the time and they use to take me to their games with them all the time . Then around 8 years olds I started playing street ball with some friends and one day one of my friends told me that he was going to sign me up to play little league which was name after( ELROD HENDRICKS ) WELL KNOWN VIRIGIN ISLANDER AND FORMER MAJOR LEAGUER… RIP. That’s where it all began for me

What was it like getting drafted and signed by the Orioles in 1995?: It was the ONE greatest DAY of my life for me and my family... I left the VIRGIN ISLANDS at age 17 on a mission to make my dreams come true. So when I got the call from my scout HARRY SHELTON I knew I was few steps away from making my dreams come true by playing in the major league and nothing was going to stop me from getting there at that point. So I very happy that Baltimore was the one team that give me that opportunity to fulfilled my dreams and making real. But without my MY MOM, AUNT LOIS, AND COACH MACALUSO for everything they done for me.  I want to give them a special thank you.

Who was your favorite coach or manager?: I can honestly say I played for some great managers and coaches. But Sam Perlozzo, he was just cool very laid back and easy to talk to about the game

Who was the biggest character you ever played with or against?: Jose Lima. He was the life of the club house, he knew how to make everybody relax and loose before a game … The best part is when he use to start singing in the clubhouse. He was cool.

What was your favorite moment from your playing career?: My first Major league hit ... HOME RUN OFF OF DAVID CONE IN BALTIMORE.

Favorite stadium or city to play in?: BOSTON. I JUST LOVING PLAYING THERE. IT’S A FEELING YOU CANT DESCRIBE UNLESS YOUR ON THE TEAM ITS CRAZY. THAT’S MY FAVORITE PARK... AND IT STARTED WITH THE FANS.

Who was the toughest pitcher that you ever faced?: PEDRO MARTINEZ MOST DEFINITELY. I remember when we was playing them in Boston and they told me that I was in the lineup and Pedro was pitching. I was like cool so the first AB I think I walk then the second AB I hit a home run off him but the funny part about that AB is that he threw all fastball and I hit a home run so the 3 AB he threw me all CHANGEUPS and I flew out so when I was heading back to the dugout he told he pick you showed me that you can hit my fastball so I wanted to see if you could of hit my change up... I just started laughing on the way back in ... ever since that day we been cool.

Is there anything you would do differently if you could do your playing career over?: I'm very proud of what I have accomplished in my career and grateful for all the teams that have given me the opportunity to represent the organization on and off the field.

Are you disappointed that you didn’t get more chances in Majors?: I would be lying if I say I no. .. But my dream became REAL ONCE I MADE IT. One thing I learned from playing this game is that you only can control what you do on and off the field, and not in the front office. I did my job GREAT :) and to the best of my ability. But life goes on and now I find joy in teaching my son and other kids how to play the game. I was fortunate to learn a lot from some great players that ever the game. So now I can TEACH what I learn over the years I played this game.

How many autograph requests do you typically get?: ITS FUNNY YOU ASK THAT. UP TO THIS DAY I DON'T KNOW HOW PEOPLE FIND MY ADDRESS BECAUSE EVERY WEEK I GET A FAN MAIL. IT FEELS GOOD THAT FANS ENJOYED THE WAY I PLAYED THE GAME AND STILL THINK ABOUT ME. BECAUSE WHEN YOU STOP PLAYING MOST PEOPLE FORGET ABOUT YOU… BUT THE REAL FANS DON’T ... SO I WILL CONTINUE TO SIGN FOR MY FANS BECAUSE WITHOUT THEM YOU AIN’T NOTHING. SO MUCH LOVE TO ALL MY FANS THAT SUPPORTED AND FOLLOWED ME THROUGHOUT MY CAREER... THANK YOU.
Posted by Andrew at 7:10 AM