For some people the third time is the charm. Let’s hope that is the case for Miguel Pena, a farmhand of the Boston Red Sox, currently playing with the Lowell Spinners. Pena, a left-handed pitcher, finally signed with the Red Sox after being drafted for the third time in his young life.


Pena was first drafted in 2009, right out of high school, when he was chosen in the 5th round by the Washington Nationals. He bypassed signing in order to attend San Jacinto Junior College. He made that look like a great decision after he went 14-2 with a 2.51 ERA in his freshman year. Such a great collegiate debut led to the San Diego Padres picking him in the 13th round in 2010. Reportedly turning down a six figure signing bonus, Pena opted to return to San Jacinto for his sophomore season, where he had an another excellent showing, going 13-3 with a 1.98 ERA, and earning a First Team All-American nod. 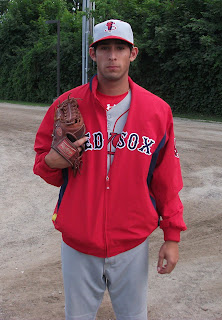 The Red Sox, a team in my biased opinion, with a sharp eye for talent, chose Pena in the 6th round of this year’s draft. This time around, Pena decided he was ready to start his professional career. Signing shortly after the draft for a reported $85,000 bonus, he was assigned to the Lowell Spinners, the Rookie League, low-A level team for Boston.


Although Lowell’s season just started, Pena looks to have a great learning experience in front of him. The Lowell coaching staff is composed of all former Major League veterans in Carlos Febles, Rich Gedman, and pitching coach Paul Abbott. As a high draft choice, the tools are obviously there, and with the type of experience his coaches bring, Pena has a great opportunity the rest of this summer.


Most scouts rave about a player’s speed or how their other physical tools rate on the baseball scouts’ “20-70 scale.” I have never seen Pena pitch, but I was able to witness one very import tool that not all players can claim. When it comes to personality, manners, and friendliness, Pena is a 70 at the least. In my time attending games and chatting with players, it is rare to come across a player of Pena’s make-up. While I am sure his physical abilities will take him far in baseball, his personable nature will be of great benefit to him both on and off the baseball diamond. I can say that I am now a fan and wish him the best. Now I just need to see him pitch a game.


How did you first become interested in baseball?: It started off with my Mom. We had an open field in the back yard. I have two older brothers, and their friends and them would get back there and start playing ball. I was only two years old. My brothers would hate it when my Mom would play because every time she’d play I would always run along beside her. Ever since then I fell in love with the game and I started off from there. So pretty much from the age of two.


Did you have a favorite team or player growing up?: Favorite player growing up I would say Randy Johnson. I would always look up to him because he was a big tall lefty like I was. I’m actually ambidextrous. I was a righty up until the age of nine. I finally got a glove to throw with my left hand. As far as a team, I never really had a favorite team up until 2004 when the Red Sox finally got over that drought; so I would say the Red Sox.


What pitches do you throw?: I have four pitches. I have a fastball, changeup, slider, and a curveball.


If everything goes as planned, when do you hope to hit the Majors?: Hopefully in three or four years, but no one can tell. It depends how you progress in the system. Outside of professional baseball, my goal was always to get there from three to five years.


Who do you model your game after?: I have a friend that plays for the Cardinals. His name is Jaime Garcia. I don’t follow after him, but I mean I did work with him for a day, a whole day, about just pitching mechanics and all the good stuff you know? But there’s a bunch of good lefty pitchers out there that I try to follow. For example, Lester from the Boston Red Sox, Jaime Garcia, Zito, Barry Zito. Just all those high profile pitchers. That’s pretty much about it.