Drafted in the 6th round of the 1990 baseball draft by the Oakland Athletics, Creighton Gubanich’s  6-3 200 pound build represented his identity as a power hitting catcher. Also playing a little third and first, Gubanich posted solid numbers everywhere he went in the minors, but was blocked at the Major League level by All Star Terry Steinbach.

In June, 1997, in the midst of his seventh year in the Oakland organization, Gubanich was traded to the Milwaukee Brewers for minor league pitcher Tony Phillips. Less than 2 months later in August, he was traded again, this time to the Colorado Rockies as the player to be named later to complete an earlier deal that had netted the Brewers Jeff Huson. Splitting his time between three AAA teams that season, Gubanich hit everywhere he went, finishing with a .310 average and 15 home runs and 57 RBI in 81 games.
1998 was another solid season for Gubanich, this time playing for the San Diego Padres’ AAA team. He hit .290 with 19 home runs and 70 RBI in just 86 games, but was not brought up to the Padres, the National League champions, who were loaded with veteran catchers.
The Boston Red Sox proved to be where Gubanich got his shot in the Major Leagues, in 1999. He had signed with them during the off-season after having been released by the Padres. He was called up by Boston on April 16th after starting catcher Scott Hatteberg hit the disabled list. Jason Varitek stepped into the starting catcher role, giving Gubanich little playing time during his first few weeks; resulting in just three at-bats on April 22nd against Detroit, producing a strikeout, double play, and a putout.
However, he announced his arrival with authority in his next opportunity, which came on May 3rd against Jimmy Haynes and the Oakland A’s. Gubanich crushed a grand slam for his first Major League hit, and also produced a single and was hit by a pitch. Despite these heroics, the Red Sox blew an early 7-0 lead and ended up losing 12-11.
With Varitek having his first great year, Gubanich was only able to get into 18 games in his stints with the Red Sox. But he did well during that time, hitting .277 with a home run and 11 RBI in 47 at bats. No team could expect better production out of their backup catcher.
Granted free agency following the 1999 season, Gubanich continued playing professionally for several more years in the minors and independent leagues, retiring following the 2003 season. He finished with career numbers of .259 with 155 home runs and 619 RBI in 1122 minor/independent league games, superior numbers for a catcher.
Creighton Gubanic still works in baseball today, sharing his love of the game with youngsters who have the same dreams he did. I was fortunate enough to find out a little bit about him and his career this week. Enjoy! 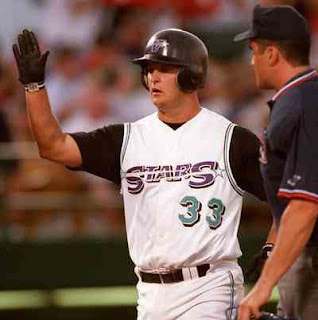