The casual observer is likely to describe Centennial Field in Burlington, Vermont, as outdated, minimalist, or worse. It is true that the current home of the Vermont Lake Monsters, the Low A short season affiliate team of the Oakland Athletics, may be all of those things, but it is also represents the best of baseball. For anyone who knows anything about baseball history, they will realize that the moment they step into Centennial that it oozes nostalgia and can occasionally make them swear they are at a game being played in a bygone era. For these reasons I am glad it is my home park; a place where baseball seems a little more disconnected from the glitz and scandal of modern baseball than you might find at your typical stadium. 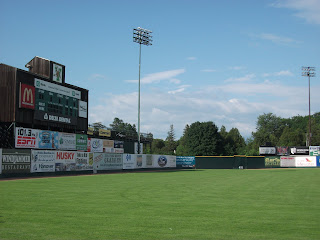 Baseball started on the field in 1906, with the current grandstand being constructed in 1922, making it one of the oldest still-in-use baseball stadiums in America; right up there with Fenway Park and Wrigley Field. The beauty of Centennial is the spectrum of baseball it represents. From the professional debut of Johnny Podres, to Ken Griffey, Jr.’s first game, an incredible number of players have performed on the diamond through the years. Teams have included the Burlington Cardinals of the Northern League, minor league teams like the Burlington Athletics, Vermont Reds, Vermont Mariners, Vermont Expos, and now the Lake Monsters. And of course, up until 2009, Centennial was the home field for the UVM baseball team until the program was eliminated as a varsity sport. 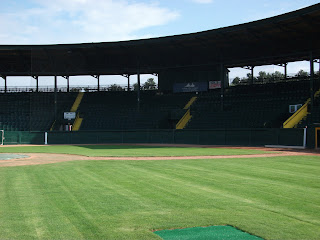 Before I continue with my idealistic rant, I will admit that Centennial is far from ideal. The seats are either the worn blocks of concrete that serve as bleachers or the brittle antique wooden chairs in the grand stand section. There are absolutely no frills at the stadium, but the staff treats you like family and enhances the baseball experience for you. It is well within reason to imagine that what you see there now is largely what you would have seen in 1970 or even 1940. 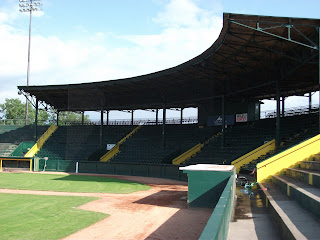 Because of its quaint and outdated structure it has had a bullseye from minor league baseball over the past few seasons. There have been so many concerns about the condition of the stadium that the 2011 season was in doubt until some last minute scrambling to update the visitor’s clubhouse and a leveling of the infield ensured that professional baseball would return again to Burlington for at least one more season. Much more work needs to be done though and from news reports it is going to take a great deal of money and cooperation from a number of people and organizations to make it happen. 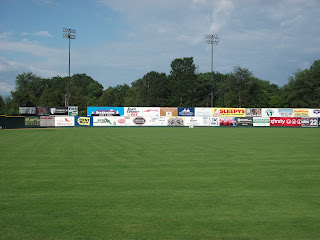 If you are looking for sushi, padded seats, and beer gardens with your baseball, then you might as well cross Centennial Field off your list as a possible destination for your next game. However, if you like to be close enough to the field to have players give you a wave, to smell the leather gloves, and to hear coaches arguing with umpires, then this stadium is just for you. For people like me who value baseball history above all else, going to games at Centennial is a little like traveling back in time. I have not been to the majority of the baseball stadiums in the United States, but I imagine there are few that stack up to this one when it comes to heritage and nostalgia. 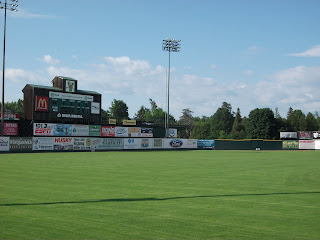 In part because our society increasingly devalues old and out of date things, baseball at Centennial may have its days numbered. At the very least it is unlikely that professional baseball will continue to be played there with the park in its current condition. It is old and you have to appreciate it for its beauty, but it is a great place to go to soak in the innate qualities of baseball. Centennial Field is my home park and before it changes or worst case scenario, closes down, I hope to see you at a game some time.
Posted by Andrew at 7:08 AM