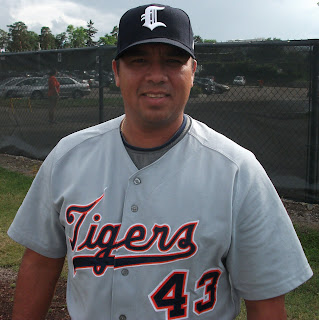 Jorge Cordova was born to coach. You can tell that after spending a only few minutes with the man, or watching him counsel young players on the field. He combines his vast knowledge of the game with one of the friendliest personalities I have ever come across. It is hard to imagine that Jorge would ever be happy at any other job than being on the baseball diamond, so it is a good thing that he has remained in the game now that his playing career is over.

Jorge was signed as a youngster out of his native Venezuela as a right handed pitcher. Leaving to play baseball marked the first time he had ever truly been away from home. He made slow, but steady progress through the minor leagues; first with the New York Yankees organization, and subsequently the Florida Marlins, the Cincinnati Reds, and finally with the Detroit Tigers.  He alternated between starting and relieving, his teams not knowing where he fit best. Regardless, he always seemed to do well with whatever role they gave him, and he became a fringe prospect.

In 2003 he was pitching with the Erie Seawolves, the Double-A affiliate of the Tigers and reached the crossroads of his career. It was near the All Star break and he was told that he would be called up to the Big Leagues the following week, when a self-inflicted injury occurred. The injury kept him out for some time and the call-up never happened. By the end of the 2004 season, Jorge, plagued by injuries decided to retire from pitching. In his six minor league seasons, he posted a 33-23 record with a 3.79 ERA over 200 games (52 starts). He also notched 15 saves an averaged close to a strikeout per inning. More information on his career statistics is available at http://www.baseball-reference.com/minors/player.cgi?id=cordov001jor .

I know I would personally be incredibly disappointed by getting so close and not getting to play in the Major Leagues for at least one game. However, Jorge is stoic in contemplating his own experience, firmly believing that everything happens for a reason and that his own journey has not yet been completed. More importantly, he believes he is exactly where he needs to be. There are no guarantees in baseball and no player is defined by one play, moment, or mistake.

These days Jorge is the pitching coach for the Connecticut Tigers, the low-A level affiliate of the Detroit Tigers. It is his second season as the team’s coach and he also served as Detroit’s Venezuelan Summer League pitching coach from 2006-2008. It is obvious that a new generation of young pitchers will benefit from his tutelage, as he seems to love baseball as much as anyone I have ever met. He is a credit to baseball and his story is one of the most unique I have ever come across. If his players are smart, they will make sure to hang on his every word, as he has the experience and knowledge to help them realize their dreams of playing in the Major Leagues.

How did you first become interested in baseball?: It was a long time ago when I was 6 years old, down in my country in Venezuela, South America. I was just trying to play basketball and try to practice karate, but when I saw somebody playing baseball it got my attention. I loved it a lot. Baseball is my life now.

What was it like getting signed? You must have been young?: Yeah, 16 years old. Because in Latin America you sign like a free agent. So I went to an American in Mexico and the New York Yankees saw me there and signed me when I was 16 years old. I played my first season when I was 17 years.

My first time away from home was really sad. I was miserable because I had never been away from home from my Dad and my Mom. Different culture, different food, different language. But here I am! After 16 years I just moved down here to the Unites States. So I changed my country I guess for a better one.

What type of pitches did you throw?: I threw a fastball, a two seam fastball, split finger, curveball, and a slider.

If you could go back and do anything about your career differently, what would you change?: Yeah, don’t punch a wall. Because that was a stupid thing, a mistake I made that took me out of baseball in 2004. In 2003 I was on the 40 man roster with the Detroit Tigers. So right then in the middle of the All Star break, I was going to get called up after the All Star break when Detroit was losing pretty bad. That season they lost 119 games. So I got a bad game in Double-A Erie and I punched a wall and broke my knuckles. So they called me to the Big Leagues after, but I can’t pitch, so I never make it. So I stayed on the 40 man roster for two years, but I never came back. So if I had to do something different, don’t punch a wall. That’s why I am coaching now and make sure my kids don’t make the same mistake.

What was the organization’s reaction after you hurt your hand?: Everybody just put their hands on their heads. “Oh my God, what did you do! This is your opportunity and we need you in the Big Leagues right now and your hurt yourself!” They fined me. The team fined me $1,000. That’s pretty bad for the minor leagues. $1,000 is a lot of money. But, I have to pay the price for the stupid things or the mistake I made. But I believe in God a lot so I think God put that mistake in my way to keep the young guys away from that and the stupid things you can do as a player.

Do you think the Tigers looked at you differently as a prospect after that incident?: Not really because after that it was really tough to get my release point again, my feeling in my fingers because it was the knuckles. After that I pulled a hamstring, I broke my bicep tendon too, so a bunch of things happened after that. A bunch of injuries happened after that. There was nothing about my personality, there was nothing about the mistake I made, it’s just not for me. Many players sign to get in professional baseball, but not too many get in the Big Leagues.

What is your coaching style?: I try to be just person to person, really close to the player. I like to be friendly. That’s why I don’t like when they call me coach or when they call me sir. When they come right after college or right after high school when they get drafted, and they used to call the coaches, “yes sir” or “yes coach.” So I just want to balance the relationship between the coach and the player. We try to be friends, with respect, but we try to be really close friends.