It is unusual for the spouse of a professional athlete to be well known outside of the city where their significant other plays- unless they are a Hollywood actress or have some other connection to popular culture. Shonda Schilling is an exception to that rule. While her husband Curt put together a Hall of Fame-worthy record on the pitching mound, Shonda carved out her own noteworthy career as an activist, author, public speaker, and mother.

Shonda graduated from Towson State University with a degree in journalism and has subsequently put that to good use. Her experience in that realm has no doubt assisted her in the many public speaking and writing projects she has undertaken. As Curt progressed in baseball, the Schillings chose to embrace their position of notoriety and use it to help others. The result has been years of working with wonderful charities and bringing attention to causes that have traditionally lacked a voice or a way to reach out to others for support and education.

The Schillings have worked with Lou Gehrig’s Disease awareness and fundraising since 1992; particularly with the ALS Foundation. They have raised millions of dollars for the cause, and Shonda has crisscrossed the country speaking, lobbying, and serving on the Board of Directors for various regional chapters.

One of the causes Shonda is most associated with is the Shade Foundation of America. After fighting her own battle with skin cancer, Shonda founded the group to bring awareness to the importance of sun exposure and sun safety. She was able to partner this cause with Major League Baseball, which was of extreme importance because of the number of people who attend and play in baseball games during sunny days.

Currently, Shonda is working hard advocating for Asperger’s education and support for families with children impacted by the condition. Because of her own personal experience, she decided to write a book entitled The Best Kind of Different, to share her own insight and let others know that there is an extensive support network out there. Famed sportscaster Bob Costas had this to say about the book:

“In this moving and insightful book, Shonda Schilling explains how she and her family came to understand and appreciate what makes her son Grant the Best Kind of Different. In the process of telling their personal story, she sheds much needed light on this often misunderstood condition.” 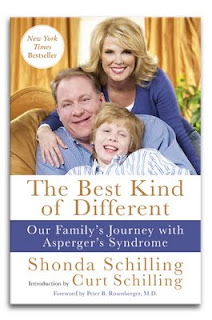 For more information on this book and the various work that Shonda performs around the country, please visit http://thebestkindofdifferent.com/ . This is also a great way to keep current with the work she is doing and explore the possibility of her get involved in your cause.

It was obvious to me that in speaking with Shonda that despite her extensive work, her primary role is and always has been that of a wife and mother. She played a pivotal role in the most famous Thanksgiving dinner in Red Sox history and is an excellent example that there is always another side of baseball. The game extends past the diamond and has the ability to act as a platform to connect people around the world and helping those in need. It is clear that Shonda is an All Star and her work is nowhere near done.

How did you first meet Curt and how long have you been together?: We have been married for 18 years and been together for 20. He was a rookie with the Baltimore Orioles and I worked for the TV station that covered them, right out of college.

Did you embrace being in the public eye because of baseball or was it something you had to adapt to?: I think that I embraced it because I mean, that’s just what I do. I embrace everything in life. You know, look for the good in it and what I can do good with it. I knew that being in that life gave me a platform and I used to try and do good for other people.

Was there a particular person or event that got you as involved in charity work?: We were playing with the Phillies and their visible charity was ALS, which is Lou Gehrig’s Disease. We just met a patient, and we didn’t have anybody in our lives that we knew that were diagnosed with it, and felt like it was something we really needed to help get the name out there and get some help for these people and get the disease known. We had someone who was running it and just really showed us what a difference us coming to things, and putting our names on things could make a difference for many families.

What was the your 2003 Thanksgiving like?: We had no idea… We played in all these cities. We played a lot of times in the National League. You hear about fans here and there, but there’s no way to really grasp how big the fans are here. So when they came out, which happened to be Thanksgiving, I looked at Theo and Jed Hoyer and they were young! And I said they don’t have Thanksgiving, they have to eat with us. Curt told them the deal was over if they didn’t come to Thanksgiving dinner, and so they did.

What are your hopes for The Best Kind of Different? Do you have other work going on centered on Asperger’s Awareness?: You know I wrote the book just out of love. It was never anything that I expected to do. I never had a bucket list with it. It was something that I wanted to give my son, but I also wanted to take the pressure off… the pressure I put on myself to raise perfect children. And there is no such thing. I thought that if I shared my story I would be helping all these parents out there that are struggling with kids that are different, and feel different, and isolate themselves. It hit the New York Times best selling list; never expected that in a million years. What it’s turned into is I get to go to all these great places like Vermont tomorrow, and to see some really great people. For some reason when we know we’re not alone it brings a great comfort to our lives.

Are you involved with an Asperger’s organization?: I did do some stuff with the Asperger’s Association of New England. Those researchers are so helpful to families that what I mostly want people to know is that the resources are available, and how much of a difference it makes in your life when you can wrap yourself around the mind of a child on the spectrum.

Are you continuing to work with ALS and the Shade Foundation of America?: We do. Unfortunately when go out of baseball a lot of the things you are asked to do are not the same, but we still support them. As far as Shade goes, that is always going to be a message for me. I do that everywhere I go. I don’t have to set up a date to go and talk about it. It’s something that’s a constant reminder; everywhere I go with my kids, you know; sun block, and telling other parents about sun block. So it’s just making that a part of our everyday lives.

Do you think charitable work is an obligation for professional athletes and their families because of the platform they have?: That’s a really tough thing. For us, we get back so much more than we give, we feel like. You have to understand that to involve yourself in something like that, it takes a piece of you. Some people can’t do that. Some people can’t make friends with people who are going to pass away. It’s too hard on them. It’s too emotionally draining on them. And so I think it’s everybody own decision. And I don’t think it should just be an athlete’s responsibility. I think it’s our whole community’s responsibility to live for ourselves, but to live to be examples for the people around us, and for the children around us, and our children’s friends.