Jon Lieber is one of those players who you don’t appreciate as much as you should until he is no longer playing. Always solid, but rarely spectacular, I was surprised when researching this article to see the numbers that Lieber had put up during his career. I suppose such sentiment lends itself to the definition of consistency, which is an apt way to describe this pitcher.
Drafted in the second round by the Kansas City Royals in 1992, the right-hander never made it to the Major Leagues with them. Instead, he was part of a trade that sent him to the Pittsburgh Pirates in 1993 for reliever Stan Belinda. The talent starved Pirates brought him up in 1994 and promptly stuck him in their starting rotation. He put up pedestrian numbers for them over the next few seasons, hovering around the .500 mark, but given the composition of the team, it would have been difficult to do much better.
The big turn in Lieber’s career came prior to the start of the 1999 season, when he was traded to the Chicago Cubs. He became a 200+ inning workhorse for them, peaking with a 20 win season in 2001, resulting in an All Star selection and a 4th place finish in the National League Cy Young voting; behind Matt Morris, Curt Schilling, and winner Randy Johnson. 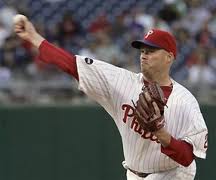 Lieber suffered through an injury plagued 2002, which contributed to him winning only 6 games and culminated Tommy John surgery. He missed the entire 2003 season while recovering from the procedure and signed as a free agent with the Yankees in time for 2004. The year off from baseball and the major surgery did not seem to have many ill effects on Lieber, as he won 14 games for New York in 2004 and 17 in 2005 and resumed his status as a workhorse pitcher.
2005 was Lieber’s last season as a dominant starter. He signed with the Phillies as a free agent and went 17-13 in a league leading 35 starts. He stayed with them for two more mediocre seasons, before finishing his career in 2008 with the Cubs as a long relief man out of their bullpen. For his career, Lieber posted a record of 131-124 with a 4.27 ERA over 14 seasons. More information on his career stats is available at http://www.baseball-reference.com/players/l/liebejo01.shtml .
It is always interesting to see how players fared against others and like most others, Lieber had some interesting outliers. He had uncanny success against Pokey Reese (1 for 19 with 8 strikeouts during his career), but was owned by Aubrey Huff (11 for 14 with 2 home runs). In total, Jon Lieber was a solid Major League starting pitcher for more than a decade, with the ability to be very good at times. Because of his steady, yet not quite star career, he will likely remain an under-appreciated commodity in the realm of baseball history.
Questionnaire Completed By Jon Lieber:
Do you remember who first told you that you were going to the Major Leagues?: Pete Vuckovich, in Buffalo, New York.
Who was your favorite coach or manager?: My favorite coach was Oscar Acosta.
What veterans took you under their wing when you reached the Majors?: Jay Bell
What is your favorite hobby?: Collecting guns.
Who was your favorite player growing up?: Steve Garvey, Dwight Gooden, and Darryl Strawberry.
Posted by Andrew at 7:46 AM