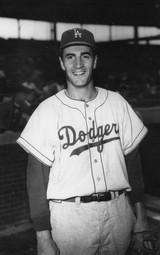 In an ironic coincidence Ralph Mauriello was born in Brooklyn, but moved with his family to the Los Angeles area as a high schooler. In 1952, the 18 year old was signed as a pitcher by the Brooklyn Dodgers, but he never made it the Majors with them until 1958, which was their first season after having moved to Los Angeles.
Mauriello had but a brief cup of coffee with the Dodgers; a sip if you will. In 1958 he appeared in 3 games with them, starting 2. He went 1-1 with a 4.63 ERA. His lone Major League win came on September 19th against John Briggs and the Chicago Cubs. Mauriello went 7.2 strong innings, including a strikeout of Ernie Banks, with the Dodgers prevailing 5-1.
It is a bit of a mystery as to why Mauriello did not get more of a chance to prove himself with the Dodgers. He pitched admirably during his brief stint with the team, and over 8 minor league seasons he posted a 75-68 record, with a 3.49 ERA. The probable answer to this question is that pitching was a strength of the Dodgers during the 1950’s, with the likes of Labine, Erskine, Koufax, Newcome, Podres, and Drysdale being amongst the fine pitchers the team enjoyed during the decade.
It was revealed in 1958 that Mauriello was one of 5 Dodger youngsters, including Don Demeter and Dick Gray, who were part of a trade the Philadelphia Phillies asked for when they tried to swap Robin Roberts to Brooklyn. The Dodgers preferred to stay pat and rejected the offer. Perhaps if the trade would have gone through Mauriello’s time in the Major Leagues would have been different.
Mauriello did not expect that he would make a fortune in baseball, so in the off season he attended USC, ultimately earning a degree in electrical engineering, and then later, a Masters Degree in the same subject from UCLA in 1965. Although he never made a big splash in the Major Leagues, he was able to do what most people cannot claim. He got a chance to play for his local team and experienced a little bit of success while doing it.
Interview with Ralph Mauriello:
Who did you first tell when you were promoted to the Major Leagues?: The first person(s) were my Mom & Dad. I was in Texas and they were in California, so it was a good phone call.
Who was your favorite coach or manager?: Ray Hathaway, an ex-Dodgers’ pitcher. He taught me what I needed to know to get to “good; baseball (AA and AAA). He taught me the changeup, improved my control, and taught me how to knock down a hitter.
Did anyone take you under their wing when you reached the Majors?: No one person. They were all quite nice and there was no hazing as there appears to be today. Although perhaps it was Carl Erskine. After my first Major League start ended in failure, (I was so excited that I was trying to throw at 110%) Carl came over to where I was sitting in the dugout and said, “Wow! Were you throwing hard. Remember, you don’t have to throw the ball through the catcher. Just reach him.” I remembered those words and won my next start against the Cubs.
What are your favorite hobbies?: I love to sing. I am a featured soloist for the San Fernando Valley Male Chorus and Shepherd of the Valley Lutheran Church choir. I also perform one-man 30 minute shows for special events such as birthday parties, anniversaries, etc… As well as entertainment for service clubs, churches, and women’s organizations.
Who was your favorite player when you were growing up?: My favorite Dodger was Dixie Walker, their right fielder, when I was a boy living in Brooklyn.
Picture from: http://www.vcstar.com/news/2010/jul/22/former-pitcher-to-sing-national-anthem-at-dodger/
Posted by Andrew at 7:06 AM