The Boston Red Sox outfield in the late 1980’s welcomed a couple of productive youngsters in Ellis Burks and Mike Greenwell, while seeing two stalwarts, Dwight Evans and Jim Rice near the end of their illustrious careers. As the outfield transitioned,  it was with great anticipation that the team drafted high school power hitting outfielder Greg Blosser with the 16th overall selection in the 1989 draft.

As Blosser progressed through the minor leagues in the early 1990’s, the Red Sox had a mediocre team, but were pressured to win at all costs by their rabid fans and inefficient ownership. This led to making moves like trading prospect Jeff Bagwell for journeyman reliever Larry Anderson and playing mediocre veterans that the team could at least depend upon for a certain level of production. Prospects like Blosser were viewed as risky because of the patience it would take to have them develop in the Major Leagues and playing known commodities, no matter their pedestrian talent level, was seen as a better strategy.

While not hitting for very high average, Blosser showed excellent power as a youngster, averaging around 20 home runs per season his first few years in the minors- when 20 home runs used to mean something. Power was something the Red Sox sorely lacked, evidenced by the 15 home runs and 74 RBI by Tom Brunansky which both led the team in 1992, the year before Blosser made his debut.

Blosser had two brief stints with the Red Sox,at the end of the 1993 season and again to start 1994. In total, he appeared in 22 games, producing 3 hits in 39 at bats, with 2 RBI and a stolen base. His hits consisted of singles against Julian Tavarez and Tim Belcher, and a double against Jamie Navarro. Unfortunately the Red Sox did not choose to stick with his development and Blosser never played in the Major Leagues again.

The minor league statistics of Blosser indicate that he could have been a very useful player in the Majors if given a better chance. In 1229 games with minor and independent league teams, he hit .255 with 199 home runs and 666 RBI. He even chipped in 72 stolen bases, showing that he had some speed when needed. Projected over an average 162 game schedule, that production equates to an average of 26 home runs, 88 RBI, and 9 stolen bases per season.

While he may not have gotten the opportunity he would have liked and deserved in the Major Leagues, he was able to play baseball as a job for many years and lived a dream that most of us can only aspire to. 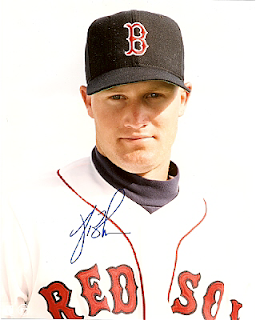 How did you first get interested in baseball?: I don’t how I became interested, I think it was always just there. My father played baseball. Not professionally, but collegiately. I think it was the typical playing whiffle ball in the back yard or playing out in the neighborhood with stick ball or what not and then it kind of went into Little League and took off from there.

What was the draft process like?: I went to Sarasota High School in southern Florida. We were a pretty good ball club. When I was a sophomore we won a state championship. I think that from there I got with such a good ball team so we started to get quite a few college scouts and professional scouts to that would come out to watch our team play. From there I never really tried out for anything like that, but ended up making a USA Junior Olympic Team. We went down to Australia and won a gold medal against Cuba down there with some other players; Charles Johnson, some other guys who played in the Major Leagues… Tyler Green and Brent Gates. I got some good notoriety there. We came back in my senior year we won another state championship. I think it was pretty fortunate to play on such a good high school baseball team.

Were you expecting to be a first round draft pick?: Yeah, we had a real good idea of where I would go… After the Olympic win and after doing the things my high school team did, there was a pretty idea that I was going to go in the first round or pretty high in the draft.

Do you have a favorite moment from your playing career?: Oh jeez. Well I can tell you my least favorite. I think I remember that more than my favorite. No, I don’t think particularly I have one moment.There are a lot of memories I got over the years of playing, 13, 14, however many years it was. There were some particularly good ones. I remember being called up to the Major Leagues. That was obviously any kid’s dream and I wished I had stayed there longer. I think if I had played with an organization outside of the American League East I would have definitely had a lot more of an opportunity, so that was difficult looking back at my career. There are not really any particular favorites other than typical 4 for 4 or 5 for 5 nights, but nothing that really stands out.

What about that least favorite moment you referred to?: I got a start in Chicago and I made two errors. That was definitely my least favorite game of all because they were both just bonehead errors that was something I would normally never do. Consequently, a couple of days later Dan Duquette sent me down to Triple A.

Did you have a favorite coach or manager?: I really liked Butch Hobson a lot. Gary Allenson was another coach that was pretty influential on my career. But Butch was a great guy to me. He was always in my corner. I think that if it was up to him he would have definitely not sent me down in ’94, but I think Dan Duquette at that time had a lot of pressure on him. I just think they weren’t position to let a rookie develop and wanted to win immediately, and that’s what happened.

How was your experience playing for the Seibu Lions in Japan?: For me it was tough. I had a brother who died in 1998. He was the third round pick of the Kansas City Royals… The next year I ended up signing to go to Japan. I would have definitely appreciated it more now. It was a very tough couple of years after he had passed. Of course when you go to another country they speak different languages and there is a lot of alone time. As far as the experience of going over and traveling all over the country, it is something I really look back on and cherish.

What was the craziest thing you ever saw on a baseball field?: I will never forget one night we were in the old Yankee Stadium in 1993. Along the first base side a fight broke out. Of course when Boston comes into New York it is pretty rowdy. Every inning there was a fan that ran out on to the field and they had to stop the game. But there was a fight that started off in the lower deck on the first base side and I will never forget the whole upper deck was just throwing their full glasses of beer, popcorn, and hotdogs all down on the lower deck. It was just hitting people around the fight and splashing everywhere. It was mayhem. I remember that night in particular. The upper deck is pretty high too so when you are getting slammed by beer and hotdogs, well, yeah…

What have you done since you stopped playing?: I did some real estate stuff. I have had my license for quite a period of time now. I do coach for baseball down here. It is 15-18 year old range with a couple guys down here. I did some private investigation work for a while. I try to keep myself busy.

How many autograph requests do you typically get?: I would say over the month I probably, maybe get 50 to 60 letters. I would say it is a pretty good amount. I am actually kind of surprised. The more years that go by it kind of gets more and more. Of course my cards aren’t worth anything, but I guess people want to get them signed… My daughter helps me handle that; keeps me straight on that…