Aaron Shipman: The Next Big Thing 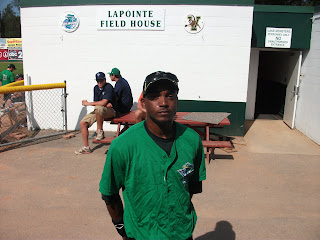 When I found out that the Oakland Athletics were the new franchise to adopt the Vermont Lake Monsters as an affiliate, Aaron Shipman was one of the players I suspected would be here in 2011, and was someone I was excited to see. Although many fine players come through the New York Penn League, it is more uncommon to see the top prospects, which is what I believe Shipman to be.
Shipman was drafted as an outfielder in the 3rd round of the 2010 draft by Oakland. Just 19 years old this season, the tools that Shipman flashes gives a glimpse to the professional player he could turn out to be. He bats and throws left-handed, and looks like he will grow into some power, to go along with his great speed- which is already rated at the very top of the scouting scale. His ceiling is the type of player I love… A Carl Crawford or Jacoby Ellsbury, who both do a little of everything; at the plate; on the base paths; and in the field. An entire team offense can be built around one player like that because of the versatility. If he develops the way the A’s believe he will, Oakland will have a special player for a long time to come.
Having already gone to a number of Vermont games this season, I can also attest to Shipman being a fan favorite. Younger players are often overwhelmed during their first professional experience, and can become withdrawn. However, Shipman is perhaps the most personable player I can recall coming through here, as I always see him chatting with both fans and players. I like being able to root for a player like Shipman, because I not only like to see natural talent come out, but also like to see the good guys win; and he is definitely one of the good guys.
Aaron Shipman Interview:
How did you first become interested in baseball?: Well I started out as a soccer player and it was kind of my first sport, at the Boy’s and Girl’s Club. I watched baseball games with my Dad, and he was always a big baseball guy. He even coached teams and eventually I was like, ‘I want to try it out.’ I guess I was maybe about six or seven years old. So just watching my Dad coach, and playing Playstation and stuff like is kind of what got me interested.


Did you have a favorite team or player growing up?: I believe my first favorite team was the Cardinals. I was a big Cardinal fan. But my family, they’re Yankee… they’re diehard Yankee fans and they’ve always loved Derek Jeter. I kind of followed them as far as liking Derek Jeter. He’s a complete player. He plays the game hard. He plays the game right.
So is Derek Jeter somebody you model your game after?: No, I wouldn’t say I model it after him, but as far as work ethic and things he does on the field, yeah. So yeah, I guess you can say that.
How was the draft process?: Shoot, man, I definitely wouldn’t want to do it again, but it was a lot of fun. As far as an agent, that was kind of mid- baseball season; high school baseball kind of thing. I had guys call, ‘hey, we’d like to represent you,’ this and that; but sometime in the middle of the season I ended up picking a guy named John Armitage. Real good guy. He’s followed me since I was in 10th grade, so he’s a real good guy.
As far as the actual draft process, man it was so fast. Everything happened so fast. It went just to playing with regular fans, to getting deep into the season with scouts everywhere… There would be more scouts than fans at the games. After the season the draft came along and then we started hearing some talk about ‘you could go as high as maybe the second round, third round, something like that.’
So as far as when the draft came around, we were sitting there watching it, and I would get texts from different scouts, you know with different offers like, ‘the team wants to offer this, if we draft you here, will you take it,’ you know, stuff like that. So I can like see the clock running and the teams on the clock texting me, and I’m like ‘man, this is too much.’ It was a lot of fun though. Eventually, the A’s, they’re not the type of team to ask you if you are going to take an amount of money, then draft you. They’ll draft you then negotiate with you. That’s kind of how my process went.
After you were drafted and signed, did you do anything special for yourself or your family?: Yeah, we kind of had a little cook-out; just immediate family there together. Had a lot of fun together right before I left and went to Arizona.
What do you think you would be doing if you weren’t playing baseball?: I don’t know. I know I would definitely be in school. I know I did the summer school thing where I was kind of negotiating with the A’s. It was tough, but I really enjoyed it. So, I know I would be in school. I’m not sure what I would be studying, but school would be my direction.
Posted by Andrew at 8:58 AM