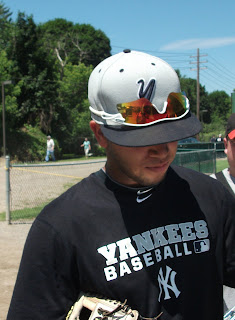 The 3000th hit and declining production of Derek Jeter have made painfully clear that the end of his career is much closer than that of its beginning. Though it may be hard for New York Yankee fans, it is time to start thinking about who will replace the iconic shortstop. Replace is not a word that really does justice to what Jeter has done for the Yankees. Instead, the Yankees should start looking at who their next starting shortstop should be. Right now an 18 year old in the low minors is a good bet to be that player. His name is Cito Culver and he has been preparing to be in that position for quite a while, even before he was drafted by New York.


Growing up, Culver idolized Jeter, and as he progressed through high school he displayed the talent to play shortstop and pitcher.  On top of top skills in the field and at bat, Culver also flashed a 95 MPH fastball and a feel for pitching. He hit .561 as a high school senior in Rochester, New York and the Yankees made him the 32nd overall selection in the first round of the 2010 draft. Despite his pitching prowess, the Yankees made his selection in the draft with the thought that he was a promising shortstop, who if everything went well, would be ready for the Major Leagues around the time when Jeter is ready to retire.
I think it is a pointless and unfair exercise to compare up and coming players to current or former players who have already established a legacy. In reality, baseball players are unique in both their talent and their personality and making comparisons more often leads to disappointment because nobody can ever really be the next so and so. Culver came to Vermont this past week with his team, the Staten Island Yankees, and I was able to see for myself exactly what New York has to look forward to. While it is obvious that Culver did well in choosing to closely follow Jeter, his game is not an exact replica, and several things came up over the three game series that made it obvious that Culver is an excellent prospect in his own unique ways.
Culver was very impressive defensively. On top of his elite arm, which he showcased on a number of throws, he also made several plays snaring balls deep in the hole, including one that was done barehanded. While I am sure that particular play made some cringe because of the possibility of injury, it was pretty cool to see. His rifle arm makes his fielding range all the more impressive, because it will allow him to make up time on some plays that are more difficult to reach.
Unless the player is Bryce Harper, I think it is pretty pointless to talk about the hitting skills of a player as young as Culver. All that matters is that he is definitely more than holding his own at the plate this season and does not seem to show any reason that he won’t continue to develop as he progresses through the minor leagues. He is a switch hitter and seems to possess enough speed that he will make a difference on the base paths each year. Within a couple of years it will likely become apparent what he will be able to contribute in the power department.
In my opinion the most impressive aspect of Culver that came across was the way he carried himself on and off the field. It was apparent that despite being the youngest player on the team, he is a vocal leader and is someone teammates look towards. Off the field, I saw him sign numerous autographs, chat with fans, and he even gave my friend’s son Tyler a pair of his batting gloves after one game, taking the time to sign each one. If you want to talk comparisons, this is probably where Culver is closest to Jeter at this time. Jeter’s success has not just happened because of production. He has also been one of the most outgoing and personable players in baseball during his career. Seeing that Culver already seems to have mastered that skill, he is just one step closer to possibly taking over for the player he grew up watching and rooting for. But if that happens, he won’t be the next Derek Jeter. He will be the first Cito Culver.
Cito Culver Interview:


How did you first become interested in baseball?: It has always been in my family. It’s what we did as a family, so that’s how I got interested.
I have read Derek Jeter is your favorite player. How did you come to look up to him?: It’s someone I always looked up to as I have come up through baseball. I mean still to this day he is my favorite player and I look up to him. He’s a really nice guy and I got to meet him, so that was a great experience for me.
What was the draft experience like for you?: It was wild. I mean it’s a once in a lifetime thing. Not a lot of people get to experience that. I had fun with it, and at some points it was overwhelming, but I had fun.
After you signed, did you do anything special for you or your family?: I just wanted to go and start playing as soon as I could. So I just left after graduation.
How does it feel to possibly be Derek Jeter’s replacement?: I don’t think about it like that. I just try to control what I can control, and just play well, and if that happens, it happens. Great if it doesn’t. I am still having fun out here.
Posted by Andrew at 7:10 AM