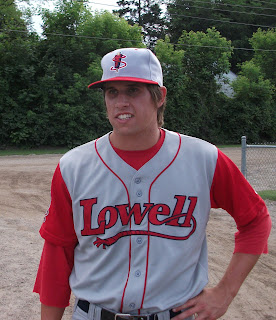 A lot of baseball teams like to play it safe in the draft. They will only pick players they think will sign, or those who may not have the highest upside, but are more of a lock to eventually contribute in some way at the Major League level. Then there are other teams who like to roll the dice. They gamble on high risk, high reward picks, and throw larger amounts of money at prospects that may have seen their stock fluctuate because of various circumstances, but remain intriguing talents. The Boston Red Sox are perhaps the biggest risk takers in baseball when it comes to their drafting strategy, and some of their most recent hopes lie with Garin Cecchini, chosen in the 4th round of the 2010 draft.
Following a fantastic junior year of high school, Cecchini was viewed as a strong candidate to be drafted in the 1st round assuming he finished his senior season in a similar fashion. Unfortunately he blew out his ACL and fell down the boards of many teams. Feeling that he could bounce back, the Red Sox not only took Cecchini early on, but also gave him around 1.3 million dollars as a signing bonus. Although he mainly played shortstop in high school, Boston believed that Cecchini projected more as a third baseman in the Big Leagues. Scouting services laud his strong defensive potential and throwing arm, along with his offensive potential, which for now centers on solid contact, but if all goes right, will eventually include power.
The Red Sox held out Cecchini for all of 2010, and finally started his professional career in 2011 with the Lowell Spinners. Last month I was able to see him play in one of his first games with the team. I had heard quite a bit about him and was excited to see what the hype was about. To my horror, in his first at bat, he was nailed on his surgically repaired knee with a fastball. It wasn’t one of those typical grazers, but one that hit squarely on bone and sounded like a gunshot. I cringed when I saw him sink to the ground in pain and wondered if it was all over before it even really started.
Cecchini got to his feet after a few minutes, but was limping so badly that I was certain he had suffered a significant injury. Surprisingly, he was not only not seriously injured, he stayed in the game. Seeing toughness come out like that for a guy who had already faced so much adversity, added a new element to his potential. There is no World Series in the New York Penn League, so nobody would have faulted Cecchini for coming out of the game. His insistence on staying, despite a noticeable limp, is a part of character and toughness that can’t be taught.
So far in 2011, Cecchini is making a decent showing statistically, but has yet to really take off. He has not hit for much average yet, but does have 13 RBI and 10 walks in 19 games. Time will only tell if the gamble of the Red Sox will pay off, but Garin Cecchini is a player to keep an eye on.
Garin Cecchini Interview:
How did you first become interested in baseball?: Well it was my Dad when I was about three, four years old. He just started throwing to me in the back yard and I just started enjoying it from there. My Mom and my Dad were both athletes, so I started enjoying it from there and never stopped.
Did you have a favorite team or player growing up?: It was the Yankees and it was Derek Jeter. I blame my Grampa for that.
Do you model your game after Jeter?: Yeah, I like to try to play hard, respect the game, don’t be hurt off the field. I think that’s what he’s known for.
If everything goes as planned, when do you hope to hit the Majors?: I don’t know, it’s not my decision. Hopefully as soon as possible, but you know it takes a little bit of development, it takes a few years to get to the Big Leagues, so I’m just going to take it day by day.
What was the draft process like?: Well I was projected as a first rounder, but obviously I tore my ACL my senior season and that fell on to whatever. I was projected from one to four. I’m definitely happy with the Red Sox. A great organization!
Posted by Andrew at 7:06 AM