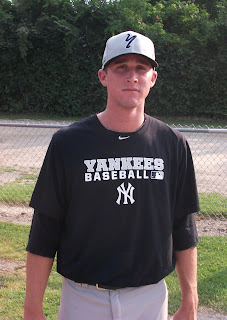 Although as a Red Sox fan, I have no room to talk, the New York Yankees always seem to have an embarrassment of riches. From their staggering Major League payroll to their stable of minor league prospects, the Yankees are perennially poised to make any move they deem necessary, and always put the best team possible on the field. In particular, building a strong minor league system has been a major part of that strategy. They are one of the teams who are always willing to go over slot in signing their picks in order to take as many chances as possible and stock their lower level teams and see what comes from it.
Bryan Mitchell is a player that the Yankees feel has been a good addition to their system. The right handed pitcher was drafted in the 16th round of the 2009 draft. As a senior in high school with Rockingham County High School in Reidsville, North Carolina, he went 5-2 with a 0.62 ERA. He absolutely dominated competition, allowing a .113 batting average to opposing hitters. In order to lure Mitchell away from a collegiate commitment to the University of North Carolina, the Yankees reportedly gave him a signing bonus in the neighborhood of $800,000.
Mitchell throws his fastball in the low 90’s, but his best pitch is his curveball, viewed as one of the best in the entire New York system. Because of his age, the Yankees have moved him cautiously through the minor so far, allowing him to only pitch in the lowest levels, and on an innings limit in order to ease him along.
All the physical tools are there for Mitchell. Experience and development of existing skills will be key in moving Mitchell along in the minors. If everything falls into place he has a very good chance of pitching with the Yankees one day, or used as a trade chip. For now he is raw, but the Yankees obviously like what they have seen and have invested a good deal of money and resources into seeing what he is able to turn into as a pitcher.
Bryan Mitchell Interview:
Who was your favorite team or player growing up?: My favorite team would probably be the Cardinals, and Albert Pujols, even though he is not a pitcher.
Did you have a favorite pitcher?: It probably sounds weird, but I really didn’t. I played baseball so much, I mean all year long. I’m going to be honest with you, I didn’t really keep up with it.
What was the draft process like?: Well the whole recruitment process started for me after my sophomore year of high school. End of my junior year is more when the pro guys started coming in. for home visits and coming in to watch me pitch. Senior year was when it really started picking up with a lot of scouts at my games.
After you signed with the Yankees, did you do anything special for you or your family?: Not really. I tried to contribute as best as I could. I got a truck. I had a truck, but I traded one in and got a newer one.
Has there been a particular coach or manager so far who has been influential?: My pitching coach now, Danny Borrell, I’ve been working with him ever since I signed. It’s kind of been me and him, one on one. We have a really good working relationship
What have you encountered in the life of a professional baseball player that has surprised you?: As far as the minor leagues, it’s not what you think about when you are growing up. Professional baseball you obviously picture the Big League life. I mean it’s a grind, that’s for sure. You don’t really realize it until you’re in it.
Posted by Andrew at 8:24 AM