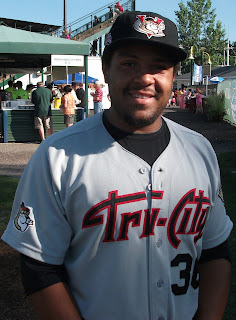 When you are developing as a player, one of the most intimidating things must be if you have a coach or manager who was a famous player themselves. Although it might be intimidating, there can’t be many better ways to learn the game than to experience that type of tutelage. The closest I ever came to such an experience was as a 14 year old in Babe Ruth baseball, as my manager that year was a recently graduated Dartmouth baseball player, whose position on the team had been backing up Brad Ausmus at catcher. Although the celebrity quotient was pretty low in that case, it was still the most enjoyable and informative experience I had with any of my youth league coaches.
Brandon Meredith, a recent draftee of the St. Louis Cardinals, has experienced first-hand the benefits of playing for a baseball legend. He spent his collegiate career at San Diego State, a team managed by Hall of Fame outfielder Tony Gwynn. Meredith is an outfielder himself, but carries more of a power bat than Gwynn ever did. A native of San Diego, Meredith was originally drafted by Tampa in the 15th round of the 2008 draft, but instead chose to go to school, where he majored in business. He decided to go pro this year after his junior season.
Meredith was chosen in the 6th round of the 2011 draft by the Houston Astros. He signed quickly and is already playing with the Tri-City Valley cats, the Houston Rookie level minor league team. I met him in person this past week and can attest that he is a big guy and looks to have the size and swing that could be sending balls over the left field wall in Minute Maid Park for years to come. Despite his size, 6-225, Meredith also has some speed, and could be Puma 2.0 for Houston fans if everything goes right. It will be interesting to track his career and see how his game translates over a full season. If you combine his talent, along with having several seasons of managing from Tony Gwynn, then I like Meredith’s chances very much for the future.
Brandon Meredith Interview:
How did you first get interested in playing baseball?:  I played every sport when I was a kid; tried everything out and figured I was best in baseball and should stick with that. I love the game and love to come out here and compete.
Did you have a favorite player or team growing up?: You know, I was a Padres fan growing up as a kid, and as I grew older I started to like players like Frank Thomas. He was a big influence for me when I was smaller, so that’s one of my favorite players.
You played college ball at San Diego State?: Yes
Was Tony Gwynn your manager?: I enjoyed it. I got to be a lot more personal than other people did with Coach Gwynn and I was able to talk with him and get a lot of information out of him.
Did you do anything to treat yourself or your family after you were drafted and signed?: No, I just had a draft party with my family and close friends and after that I headed out to Tri-City. I think I’m going to do something big when I get back and enjoy that time and enjoy it with my family.
How much has life changed since you got drafted?: It’s been a big change, but it’s for the better. I’m been enjoying myself out here; I enjoy pro baseball and just coming out and only worrying about baseball every day.
Posted by Andrew at 7:04 AM