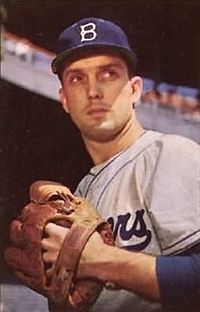 
Did you ever play against any Negro League Teams?: Well we didn’t play directly against the Negro teams, but my winter season in Cuba, I did play against some outstanding Negro players. Some of them were Cubans and I think in some cases there might have been a couple of Americans there. Monte Irvin maybe was in that league and he’s a black player. In my experience in baseball, starting as a kid, there was no mixing of teams, black or white, and I don’t think I ever pitched against a black team… There were a lot of black teams in the area where I lived.
What was Jackie Robinson like as a teammate?: I played with Jackie nine season. Initially how I met him, I was in the minor leagues in ’47, that was Jackie’s rookie year in the Big Leagues. In the spring of ’48, my second season, I was in Double-A Forth-Worth, Texas, and we played the Big League team in a spring exhibition game in Fort Worth and I pitched against the real Dodgers. I didn’t pitch the whole game. I pitched maybe five innings and I did okay. When the game was over, Robinson, who I didn’t know… I didn’t know anyone on the big team, but Robinson came across the field and asked for me by name. He said, “Where’s Erskine?” I stepped out of the dugout and Jackie Robinson stuck out his hand and shook my hand and said, “Son, you’re not going to be in this league very long. I hit against you twice today and with the stuff you got, you are going to be in the Big Leagues soon.” Now that’s how I met Jackie. He went out of his way to encourage a young kid in the minors. And sure enough I won 15 games there in Fort Worth and by mid season they called me up. So that was the beginning of a good friendship and a longtime teammate with Jackie.


Do you think Gil Hodges and Carl Furillo were Hall of Fame caliber players?: I think that’s a numbers game. Certainly those two players were well, well, well above average Major League Players, both of them and played a long time. It is difficult if you look at the numbers and try to compare the innings, and the hits, and the home runs, and so forth. Both of those players in my opinion are Hall of Fame caliber but there are a lot of players who were outstanding players who are not in the Hall of Fame.
Did Brooklyn Dodger fans deserve their unique reputation?: What was it like playing in Brooklyn?: Well, I’ll tell you. I think fans in any city are going to embrace a team, especially in my era because teams kept players together indefinitely. Free agency today changes all that and guys move around so much. In my day if you said Ted Williams, you knew it was the Red Sox. If you said Stan Musial, you knew it was the Cardinals; Joe DiMaggio, you knew it was the Yankees. Today, that’s quite different. Pujols in St. Louis may stay there forever, but maybe not. He could play for the Yankees or somebody eventually. So the fans in Brooklyn were uniquely stoic supporters. The truth of that was they supported teams well before I got there who were not contenders; they were not contending teams. So the Dodgers have that reputation for kind of being clowns, cellar dwellers, and running the wrong way on the bases. But in the ‘40s after World War II Branch Rickey came from the Cardinals organization where he had built a strong dynasty. He came to the Dodgers and he began to build this franchise with a big farm system. He had almost 800 players under contract and 46 farm teams. So he built a strong organization that started to win. When Jackie came on the team in ’47 the next decade, I think the Dodgers won the National League championship maybe six times and Jackie was the center piece. So the fans finally got respectability by having a team that could stand up and beat almost anybody. They did have trouble with the Yankees in the World Series.
The Dodgers’ fans in Brooklyn, they adopted the team and adopted us. In the neighborhoods we were brought in like we belonged to the families. And we lived in the same neighborhoods for a decade and that brought us really close to the fans. I would pitch a good ball game and would come home and the fans would have a street party. Both no-hitters, one in ’52 and later, one in 1956, when I came home from the ballpark, both day games, the neighbors were all out waiting for me and they had balloons in the trees and the street blocked off and had a street party.
Are you a fan of the modern game of baseball?: I am, yes. I am very, very cautious about being critical of the game. I have some things I don’t like about the game today. Baseball follows the culture of the country. In my era, the culture was far different than it is now, plus free agency, and 12 year contracts, and expansion has changed the whole atmosphere of baseball. So the era I played in, which was unique in its own time, but to try to compare it to today is so different. The game is the same. I could still instruct in a baseball setting. I could still instruct on how to bunt, how to throw a curveball, how to use your glove effectively. A lot of those basic techniques are still the same, but the size of the stadiums, the scheduling, the salaries, so many things are not the same. For instance it was important in my day to have a roommate. It helps you. They used to get guys together who were real compatible or they might decide a young player would do well if they moved him with a savvy old timer. And so they used to match the roommates. Well today everybody gets their own private room and nobody are roommates any more.
When I started baseball it was played in sunshine. There were no night games. Baseball went from a day game to a night game. Then it went from a train game to a plane game. It went from radio to tv. It went from all white to integrated, and it went from east coast to west coast. All that happened in a decade, like ’47 to the early 60’s. So even though all the changes happened, the game on the field didn’t change that much. I’m still a strong believer of the game in general. It’s still one of America’s jewels.