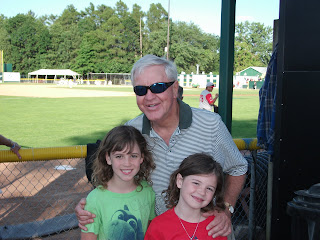 I love baseball in all forms, but in particular I have a soft spot for the minor leagues. Although the talent level is not as high as in the Majors, there is a certain nostalgic quality in seeing a collection of young men working towards a goal of making it big in professional baseball. Therefore it has been amazing being able to literally live across the street from the Vermont Lake Monsters for the past five years. There is nothing quite like strolling across the street if I am in the mood for a baseball game- which I often am.
The past couple of years have been nervous ones when it has come to the Lake Monsters. They play in historic, yet dilapidated Centennial Field, which is one of the oldest stadiums in professional baseball, but absent of frills or other modern conveniences. Up until this year, the Lake Monsters were contracted with the Montreal Expos and then Washington Nationals, notoriously frugal organizations. These factors all contributed to doubts that professional baseball would continue in Vermont.
The Lake Monsters are owned by Burlington Vermont businessman Ray Pecor. In 1993 he purchased the Jamestown Expos in the New York Penn League and moved the team to Burlington, renaming them the Vermont Expos. The team name was changed to the Lake Monsters following the 2005 season, after the parent club moved to Washington became the Nationals.
Pecor has faced the challenge of wanting to keep the Lake Monsters in Vermont, but also wanting support for a new stadium, or at the least, a significantly revamped Centennial Field. Given the amount of money it would take, it has been a project that has not been fully embraced by the local budget keepers. There has been a split in the community who would like to see the community contribute more, and those who would like to see Pecor ride to the financial rescue.
After the 2010 New York Penn League season concluded, the future of the Vermont team looked grim. All signs pointed to no baseball for 2011. Even so, the Oakland Athletics signed on to be the new Major League affiliate for the team. Somehow enough money was found to do some minor repairs around the stadium to buy at least one more season, and time to think about a more long term solution.
At the start of the 2011 season I was able to chat with Ray Pecor and find out a little more about his involvement and thoughts on the future of the team. I have enjoyed going to games for many years and hope the team continues to be a fixture in Burlington.
Ray Pecor Interview:

How did you come to own the Lake Monsters?: This is I think, our 18th year. I came to buy the team because there was a Double-A team here years ago. It was a Cincinnati Reds affiliate and the person that owned the team lived in Massachusetts and he decided to move the team from here to the Ohio area, and they built a new stadium for him out there and he moved out to Ohio. There was a couple of years that we did not have minor league baseball here. A number of people from the community came to me and said that 'we know that you love baseball and we would love to have baseball back. Is there some way you’d be interested in getting involved?' There it went!
What was your favorite baseball team growing up?: The Red Sox. Always. New England. I’m a New England guy. I’ve loved baseball since I was maybe in grade school. My Dad loved baseball so he passed it on.
Is it a difficult process when your player development agreement comes up with your parent club?: It’s called a player development contract. As long as we are a team in good standing in the league, then we are guaranteed a team.
Are you hopeful we will have a team in 2012?: Oh, yes, we will. We’ll be here next year. I think it’s more than hopeful. I think we’re definite.
What are the next changes that need to happen to move forward with the team?: Well you know the dream of course would be to have a new stadium. That would be the dream. And I’m not sure the State of Vermont can afford it, or I can afford to have a new stadium, but that’s the dream. And so, short of that, if you’ve been here in the past, you’ve seen we’ve made a lot of changes this year. We’ll continue to make changes and we’ll work with the University to try to make new changes. You know with them getting rid of baseball it’s a little precarious whether they really would like to have us there or not. So far they’ve been a great landlord; a great landlord.
If you had your wish come true and could have a new stadium, would you rather rebuild Centennial Field or build on a new site?: It would be better in my opinion to have a different site. And the reasons are for the neighborhood; it’s hard to do fireworks. There’s really very limited parking. Those two things are very detrimental to the team, so that would be the choice; to have a new stadium somewhere else. Now where, I don’t know.
Posted by Andrew at 7:05 AM