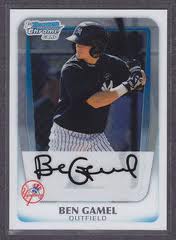 People often try to measure themselves against an older brother when going through life. It is a part of the fraternal bond. This dynamic becomes even more interesting when a pair of brothers play the same professional sport. Major League Baseball has seen some great sets of brothers over the years, including the Waners, the Alous, and the Niekros.

The Gamels are another baseball brother duo. Mat is a third baseman in the Milwaukee Brewers’ system, who has been viewed as a top prospect for several years, and has already put in 85 games at the Major League level since 2008. His younger brother Ben is an outfielder, who is just getting started in the low levels of the New York Yankees farm system. Ben has a long way to go, but aspires to reach the same level of success of Mat.

Ben was taken in the 10th round of the 2010 MLB Draft out of Bishop Kenny High School in Florida. At 5-10 and 156 pounds, he is significantly smaller than his power hitting brother, but still has room to grow and get stronger. The scouting report on Ben indicates that he is a pure left-handed hitter, who does not currently possess power, but could develop it over time. The Yankees liked his amateur performance and pedigree enough to give him an over-slot signing bonus, reported to be in the neighborhood of $500,000.

Ben is with the Staten Island Yankees this season. You can check out his progress by going to http://web.minorleaguebaseball.com/milb/stats/stats.jsp?pos=OF&sid=milb&t=p_pbp&pid=592325.

On top of his natural talent, Ben is surely driven to compete with his brother and to put the best version of himself on the field every day. This may give him an advantage that most players do not have, but also represents added pressure to succeed. Just 19 years old, time is on his side, and if all goes as planned, Ben Gamel will become a name that we are all familiar with.

Who was your favorite team and player growing up?: My favorite team has always been the Braves, and Chipper Jones; probably because he plays on the Braves. I try to model my game on my brother Mat, even though he plays a different position; but my swing and everything is kind of based off his.

What was the draft process like for you?: I just kind of went out and played, and my advisor helped me a lot through that. He was really helpful through that whole thing, keeping me up to date on what was going on.

Did you do anything special for yourself after you were drafted?: I bought a truck. I bought a big old white colored Sierra with a low lift kit on it.

What do you think you would be doing if you weren’t playing baseball?: Ugh, tough question. I have no idea. I mean I’ve played ball my whole life, it’s pretty much all I know. I’d probably go to school at Florida State or something and fish a lot.

What is the craziest thing you have seen since you have been in the minor leagues?: Today in batting practice one of our players hit a ball on top of that (indicates a building far away from home plate in left-center field). That was pretty crazy. Just having a brother in the Big Leagues, and just seeing him on tv is pretty crazy too.

What has it been like having a brother who is a big time prospect?: It’s helped me out a bunch. He got the name out there. So, he’s definitely the big reason why I am where I am today. People just knowing the last name Gamel definitely helped.