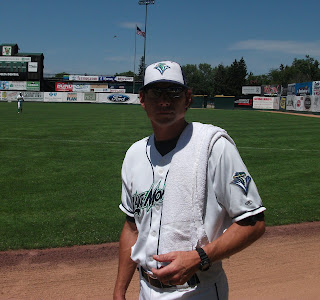 Almost every Major League baseball player was a star in some form when they were in high school or college. That all changes when they reach professional baseball and are surrounded by other former stars who are all after the same goal of making a career in the game. The competition level changes so drastically that most players have to completely reinvent themselves. Some players are unable to come to terms with no longer being the dominant force they were in their youth, while others are able to adapt and take what the game and their own hard work gives them. John Wasdin is an example of the latter.

Wasdin was a dominant force in college with Florida State University. In 46 career games as a Seminole, he went 16-4 with a 3.17 ERA, striking out 229 in 193.1 innings. He had originally been drafted in 1990 by the New York Yankees in the 41st round, but decided to polish his skills as a college player. That decision paid off many times over given his career with FSU, and he was drafted as the 25th overall selection in the 1993 draft by the Oakland Athletics. He was immediately a hot minor league prospect, putting up a 15-4 record in 1994, and 12 more wins in 1995. This garnered him a call-up at the end of the 1995 season, appearing in 5 games and picking up his first career win, against the Minnesota Twins.

Stardom was not in the cards for Wasdin, but instead of letting that deter him, he made himself into a super utility pitcher, willing and able to take the mound any place, any time, and in any situation. Guys like that are invaluable for any pitching staff, and because he embraced that role, Wasdin carved out a 12 year Major League career between 1995 and 2007 with the A’s, Red Sox, Rockies, Orioles, Blue Jays, Rangers, and Pirates. During that time he pitched in 328 games with 65 starts, and had a 39-39 record and 5.28 ERA. He pitched for the Cardinals’ minor league system in 2008, and then in Japan in 2009, before retiring as a player. More information on Wasdin’s career statistics is available at http://www.baseball-reference.com/players/w/wasdijo01.shtml.

I have to say that I always enjoyed watching Wasdin when he pitched for my Red Sox from 1997 to 1999. He was primarily the long man out of the pen for those teams, but I still remember him as the guy who was the lynchpin of the bullpen, always pitching an extra inning or making a spot start to save the team. He did draw the nickname of “Way Back” in Boston because of being prone to home runs, but if you look at his peripheral numbers, he was a key member of the pitching staff and generally put up good stats.

These days Wasdin is the pitching coach for the Vermont Lake Monsters, a minor league affiliate of the Oakland A’s. I consider coaches like him to be invaluable because they have seen just about everything and been just about everywhere a player can go in professional baseball. Because of this he knows what is needed to succeed, as talent alone is not the only key to making it in the game. From the way the Lake Monsters and their pitchers have performed so far, it is obvious that Wasdin has had a positive impact and has a promising career as a coach and mentor to young players who hope to make it as far in baseball as he did.

How did you first get interested in baseball?: My father was a baseball player and an athlete. He just always had time for me as a kid. He played softball and adult baseball and all that, so always traveling around, following him around. At a young age I was in the outfield chasing flies, and they taught me how to keep the book, and all that kind of stuff. So at a very young age, I always had a glove and a ball, and that is what young boys are supposed to do. It’s just the love of that game and itself and being out there, just kind of took over and went from there. And now I am almost 39 years old and still doing it.

Did you have a player or team growing up?: Probably the Atlanta Braves. Growing up in Tallahassee, Florida, the TBS channel was really the only thing that played, so every afternoon, after school you always had the Atlanta Braves on. It was the Dale Murphys, the Bob Horners… that baby blue Atlanta Braves was the team that I followed growing up.

Was there a particular pitcher you modeled yourself after growing up?: I probably wouldn’t say one particular pitcher. My Dad was a pitcher, so he taught me the mechanics that I used. I always followed his rules. But I was always more of a Dale Murphy fan, and Dave Winfield and those guys. Those are the guys I kind of idolized. At that young age every kid’s a hitter. No one wants to be the pitcher.

Did you do anything special for yourself or your family when you were drafted?: I signed in ’93, and I was like the fifth guy to sign, and I wanted to hurry up and get my baseball career started. I ended up getting to throw almost 80 innings after I signed, so it was nothing really special. I bought a pickup truck and then came on out to Arizona and did my physical, and was in Madison. That’s where I started my pro career was Madison, Wisconsin. I was a Madison Muskie.

What was your experience like in Boston?: You know at first it was really difficult for me. Just coming from the Oakland A’s where the media market wasn’t as big at the time... My very first Major League debut was against the Red Sox and I think that’s more than likely what got me traded over there; seeing the potential I might have had. It was hard with the media and stuff at first, but then after you after to know what it’s all about, I think it made me a better ball player mentally. Learning how to deal with things like that; the ups and downs, and the pressures…

If you are going to play with a team like that that’s world renowned, you need to put up the numbers and do good. I got the chance to start and relieve, and do more of a utility pitcher. Once I kind of grasped that role, knowing that there really isn’t a set time you’re going to go in or out, it could always be at any moment, and I learned to do that. I made myself a career of being that utility pitcher; willing and ready to go at any minute’s notice, whether it’s start or relieve, or throw three or four days in a row. I think probably being in Boston helped me with the mental part of the game, and it carried me on through my 17 year career.

If you could do anything differently about your career, what would that be?: I wouldn’t say there is one particular thing. But in 2003 I had just gotten back from Japan. I was with the Pirates in the minor leagues in Nashville and we had an unbelievable team. I was in Big League camp and got sent out, but at that point I took my free agency out. I could have probably had a career year and we could have taken that team, because there were so many good guys on that team, but we all started taking our outs because the Pirates didn’t call anyone up. That team just floated away, but there could have been some seriously neat and exciting numbers. I started the year with a perfect game and things like that, but I chose to take my out and leave. So that would probably be the only regret if there was one.