Babe Martin: One of the "Babes" 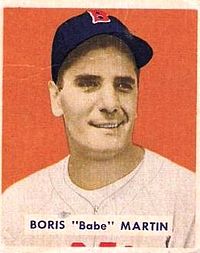 One of the great things about baseball has been all of the great nicknames that have appeared over the years. One of the most basic, yet classic, is Babe. Like other monikers, Babe was once relatively common, but has become an extinct species. Babe Birrer was the last active Major League “Babe” when he pitched 16 games in relief for the 1958 Los Angeles Dodgers. Of course Babe Ruth epitomizes the name, but there have been a number of others who played in the Big Leagues.
Babe Martin was one of those players. Born as Boris Michael Martin, he played outfield and a few games at first base and catcher during parts of six seasons with the Red Sox and Browns between 1944 and 1953. To my knowledge, although we share a last name, we are not related. Babe was never able to stick in the Major Leagues, despite hitting an even .300 during his minor league career.
One of the interesting things I found in doing a little internet research on Babe was that he supposedly had a strong dislike for Pete Gray, the one-armed outfielder for the Browns in 1945. I suspect that this animosity was equal parts because they were in competition for playing time (in 1945 the production of these two players was almost identical), and also because Gray was renowned for being a prickly personality. Babe did not hold back when I asked him about Gray, first giving him a back-handed compliment and then outright insulting him. Martin must have been frustrated that despite proving himself in the minors, he was not able to break through as a regular in the Majors, even though his main competition was equal parts talent and spectacle. I hope I get the opportunity one day to ask Babe follow up questions about the situation.
Unfortunately, Babe Martin simply couldn’t get it going in the Majors. He hit .214 in 69 games over six seasons. For more information on his career, check out http://www.baseball-reference.com/players/m/martiba01.shtml. Make sure to check out his minor league stats as well, since he did have a very productive career there. Although he did not make a splash in baseball, Martin at least can lay claim to being a “Babe.”
Babe Martin Questionnaire:
What was your favorite city to play in as a visiting player?: Yankee Stadium.
Who was the toughest pitcher you ever faced?: Andrew, they were all tough. Al Benton, Hal Newhouser, Dizzy Trout- Detroit Tigers.
What was your favorite moment as a ballplayer?: Coming to the Major Leagues of course.
How good of a player was Pete Gray?: Best one-armed player I have ever seen. Not a nice person.
Where was the best place to get a steak while on the road?: Toots Shors’ in New York with Dom DiMaggio and Jack Kramer.
What were the benefits you enjoyed most of being a ballplayer?: Meeting some very fine people. Went to work for one for twelve years. Did very well.
Did you play with anyone who would have made a good manager, but never was hired as one?: A number of them- Dom DiMaggio, Johnny Pesky, Sam Mele. I am sure others also.
If you had to do it over again, would you do anything differently?: I had done one semester of college. Would have finished some if I had known how important it was after baseball.
Posted by Andrew at 8:49 AM