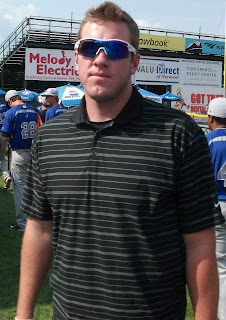 When it comes to judging baseball prospects, evaluators can be tough. Patience goes only so far, and players who have been identified in the upper echelon are expected to produce immediately. You can’t blame teams for being impatient. In today’s game, top prospects earn into the millions of dollars for signing bonuses, and their teams want to see those investments pay off.


Right handed pitcher Matt Hobgood was taken as the 5th overall selection in the 2009 draft by the Baltimore Orioles. He was a high school phenom, setting 14 baseball records at Norco High School in southern California. Although he was the best power hitter his school district has ever seen, he showed even more promise on the mound, with a fastball in the 90’s and a sharp curveball. During his junior and senior seasons, Matt hit 40 home runs and went 21-1 as a pitcher. He was the 2009 Gatorade National Player of the Year as a senior, going 11-1 with a 0.92 ERA. The pitching-poor Orioles jumped on the chance to grab him in the draft, passing on the likes of Mike Leake, Drew Storen, and Aaron Crow.


As somebody who follows minor league baseball with a great deal of interest, I have seen that there have been a lot of critics who have jumped on Matt because he has not raced out of the gate to start his professional career. Coming into 2011 he has gone 4-9 with a 4.48 ERA in 29 starts. He was plagued with injuries to start this season and is just getting back to pitching in games. Because of this, he has fallen off the prospect radar a bit compared to others from his draft class.


I got into a good-natured back and forth with Matt on Twitter this past week about the recent brawl between the Red Sox and the Orioles. I was pleased to find out shortly thereafter that he would be coming to Vermont as part of an injury rehab with the Aberdeen Ironbirds. He went 4 innings in the game I was able to see him pitch, giving up three runs and striking out three. He wasn’t dominating, but it did appear that the opposing team had a very difficult time with his curveball, as evidenced by the number of buckled knees. Later in the series, he graciously agreed to speak with me and I was finally able to meet him.


It will be interesting to see how Matt does as he continues to traverse through the Baltimore system. Even though he has not exploded on to the scene, he is still just 20. If he is able to get healthy, he has every chance to make an impact at the Major League level. One thing that stood out to me was Matt’s size. Listed at 6-4 and 245 pounds, he seemed even larger than that. I am a big guy myself, yet felt small when I was standing next to him. He definitely has the build of a power pitcher. All that remains to be seen is if he can put everything together and push on to the next level.
Matt Hobgood Interview:


How did you first become interested in baseball?: I grew up in Arizona, and we had a three car garage, and the third car was actually just a brick wall. One day I somehow found a ball, and I was out there throwing. I was home-schooled until eighth grade. As my Mom tells it, my Dad came in and says ‘looks like he can throw the ball a little bit. Maybe we should get him into baseball.’ I was about nine, so that’s when I first started playing. And now here I am playing pro baseball.


Did you have a favorite player or team growing up?: Growing up in Arizona, there’s the Diamondbacks obviously. I really liked Randy Johnson. I still like him, just because of the way he goes after hitters. He strikes fear into a lot of hitters, and that all started with his appearance against Krukkie, where he threw behind him. Just the way he goes after them. I don’t really have teams per se. I mean I went to Game 2 of the World Series in ’01 and that was pretty cool to see. Just the atmosphere of regular season baseball compared to playoff baseball, and at that time, World Series baseball.


You went number 5 overall in the 2009 draft. What was that process like? Is the Jerry Maguire portrayal of agents pretty accurate?: Yeah, Yeah. I’ve had an agent, or an adviser, quote unquote, since junior year, and he really helped me out with that a lot. Leading up to the draft it was pretty exciting. They told me if Ackley was there they were going to take him, and if he wasn’t, and they were going to take me. And that was just about an hour before the draft, so when he went second, I was kind of hoping for what could be coming next. It was a dream come true and something I had been working for, for a long time. Now I am starting a new goal of trying to make the Majors.


What has been your biggest challenge thus far in professional baseball?: Probably just the schedule. Just everything; throwing, playing every day. In high school you throw once a week and get Saturday and Sunday off. Up here you play 142 games; well at least last year in Delmarva I did. The bus schedule… your sleeping schedule gets messed up. It’s not coming out an hour before the game like high school and just playing. There’s a lot more to it, but I’m having fun with it.