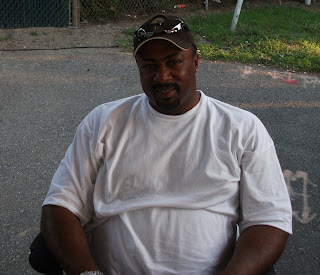 When I was growing up my favorite type of baseball player was a slugger. Players that exhibited other baseball skills were fine, but I was geared towards the guys who posted big home run and RBI numbers. I was fascinated by guys like Pete Incaviglia and Joey Meyer, and took a lot of pleasure in marveling over the stats on the backs of their baseball cards, and pretending to be them in my yard, with a whiffle bat and ball.

As a Red Sox fan, I was very excited when Sam Horn emerged as a top prospect for my favorite team during the mid to late 1980’s. Sam not only put up big power numbers, he looked the part of a slugger. At 6-5 and 250 pounds, he appeared even larger on my baseball cards and in my Red Sox yearbooks. I think I was probably also drawn to him because I was a big kid, and he was a role model who showed me that someone my size could do great things on a baseball diamond.

Sam earned the right to be given a chance as a starter in Boston. He was drafted in the first round of the 1982 MLB draft and blasted his way through the minor leagues. He finally forced himself on the Boston roster in 1987 after hitting .321 with 30 home runs and 84 RBI in a half season (94 games) with Triple-A Pawtucket.

I thought then, and I still think now, that it was a great shame that Sam was not given more of an opportunity to play on a regular basis in Boston. He came up as a designated hitter in 1987 and proved his offensive potential immediately, hitting .278 with 14 home runs and 34 RBI in 46 games. His home runs were typically majestic shots, as when he really laid into a pitch, he could hit it a far ways.

Sam played sporadically in 1988 and 1989, as the Red Sox preferred to trot out aging former stars like Don Baylor and Jim Rice at the DH position, instead of giving Sam more of a chance. Young players need to play consistently in order to develop, but Sam did not get that needed experience. Over time, the strategy to go with older veterans instead of developing young talent, left Boston with a team that was very light on offense and difficult to watch by the early 1990’s.

Unfortunately, when Sam was with them, the Red Sox organization was not the same franchise it is today. At that time, the team was headed by Jean Yawkey, the widow of long time owner Tom Yawkey. Jean was not an experienced baseball person, and the team suffered because of it. Additionally, Boston was continuing to come to terms with a past that struggled with racism, both as a city and as a baseball team.

In 1959 the Red Sox were the last Major League team to integrate, and for a number of years after that, they had a low number of black players on the Big League team and in their minor league system. There were also high profile racial incidents that the club was involved with which made headlines. The time when Sam was with the Red Sox was very much a transitional period for the franchise.

I was disappointed when the Red Sox released Sam following the 1989 season. They had given him less than 75 at bats in both 1988 and 1989, and decided to give up on him despite him being only 26 years old. He went on to play five more Major League seasons with the Orioles, Indians, and Rangers, and hit .240 with 62 home runs and 179 RBI in 389 career games. He was dominant is his minor league career with 226 home runs in just 1187 games. More information about his career statistics can be found at http://www.baseball-reference.com/players/h/hornsa01.shtml.

Since he stopped playing he became a fixture in Boston, working for the Red Sox, their television network NESN, and being part of the eponymous website http://sonsofsamhorn.net, perhaps the largest and most respected baseball fan site in the world. In 2007 he even ran for President of Red Sox Nation, but lost to Jerry Remy. I get the feeling Sam will always be connected with the Red Sox and baseball in one way or another.

Even though he never became a star with the Red Sox, I have to admit that last week, more than 20 years after he last played for Boston, I was incredibly excited to be able to meet Sam. He didn’t disappoint, and even looked like he could still hit a few over the fence. It was a great pleasure being able to chat with him for a few minutes, and he answered some questions I had about his career and, his thoughts on baseball.

How did you first become interested in playing baseball?: Basically, one of my friends at school came home with me one day, and asked my Mom if I could play ball. The next day at school, we went to practice and I didn’t have a glove, a bat, or anything. So when we went to the practice, the coach said ‘just go on the field and let the ball hit the ground and throw them in.’ I tried to throw them over the backstop and everywhere else I could, and he said ‘take it easy.’

After everyone finished hitting he said, ‘you shagged, your turn to hit.’ I hit a couple of home runs and the guy said, ‘hey, we maybe want you to play on our team.’ So, all of the kids said, ‘who is the fat guy?’ A couple of days later, after I had played a couple of games, they said, ‘we want the fat guy on our team.’ That’s basically how I became a baseball player.

You were drafted in the first round by Boston in 1982. How did you first find out that the Red Sox were interested in you?: I did not know that they were interested in me. The day that I got drafted I tried not to pay that any attention, cause nobody knows what is really going to happen.

At school, my principal actually sent for me to come to the office. I came into the office and he said, ‘Congratulations, you’ve been drafted by the Boston Red Sox.’ And not to sound too crazy, but I didn’t know where Boston was. So that was pretty funny.

How different would you say the Red Sox organization is now compared to when you played for them?: I would just say basically, right now the new management, the manager Terry Francona, is a guy who came up at a good time and has been around players of multiple races, or whatever. So, it wasn’t a situation as when I came in where it was basically only black or white. We basically had to take a back seat to most players.

Now, when you look at all teams, they try to, more or less, let everyone contribute to a win or a loss. When I played, they more or less said ‘we have to pay this player’ or ‘this person has to play because they’re making X amount of dollars.’ And it wasn’t all about necessarily winning because the Red Sox have always had a lot of history and the owners had a lot of money, so they really wasn’t worried about all that.

I did my graduate school thesis on the Red Sox and race. Was it difficult playing in Boston in the late 1980’s?: I enjoyed playing. It was great playing there. I don’t really have much to say about the race part, but you said you’re a historian of that, so you know they were the last team to have a black person on their team. So I think that speaks volumes, but at the same time this is 2011, so you’ve got to kind of overlook it and just say the ownership at that time wasn’t interested in having a black on their team, and they thought they could win without them, and maybe that’s why they suffered for 86 years.

Is there anything differently you would do about your career?: I would have maybe asked to be traded to a team that would have utilized my talents a little bit better. Because, being in the situation that I was in, I think that I did a lot of things for the game as far as being a Triple Crown player coming to the Big Leagues, but then not having a chance to play as frequent. Where they have players now, and I’m not going to say any names, but you just look at the players, and not just the Red Sox organization, but the players in the minor leagues. Look at their resumes that got them to the Major Leagues, and then go back in history and look at the players and what they used to have to do just to get to the Majors, compared to now, they are just given opportunity. You learn in the Majors, where when I came up, you had to not learn in the minors, but you had to succeed in the minors before you even got a shot in the Majors. Now they’re learning and they’re getting chances in the Majors.