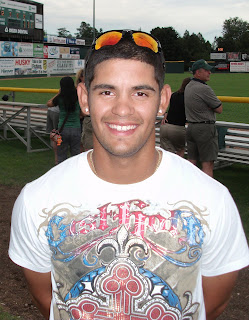 I love keeping up with Boston Red Sox prospects. Boston has relied heavily on its farm system during their recent period of dominance. Dustin Pedroia, Kevin Youkilis, Jon Lester, Jacoby Ellsbury, and Jonathan Papelbon are among the homegrown products that have been raised from the draft over the past decade. The bonds they formed from playing together for many years, in some cases going back to their time in the minors, has undoubtedly had a positive impact on the Big League club.

The majority of players who get drafted will never make it to the Major Leagues, but the core of the current Red Sox team prove that gems can be mined from a well-run player development program. Boston has also used top prospects to obtain more established talent from other teams. Josh Beckett and Adrian Gonzalez came over in exchange for prospects that included Hanley Ramirez, Casey Kelly, and Anthony Rizzo. Essentially, prospects are used as another form of currency in baseball, and can make or break a team.

Some prospects fly under the radar more than others. I believe that right-handed pitcher Jason Garcia is one of those players. He was drafted in the 14th round of the 2010 draft out of high school. All the scouting reports I saw indicated that Garcia was a decent, but unspectacular pitcher. Being very young, there is plenty of time for him to grow, but no huge expectations of how Garcia will develop. With less pressure on him than a lot of prospects, Garcia has started to blossom into a player worth watching.

Still just 18 years old, Garcia has pitched very well since being drafted, with a 3.28 ERA and no home runs allowed in 60.1 innings. He has statistically been the best starting pitcher this season for the Low-A Lowell Spinners. More information about his statistics is available at http://www.baseball-reference.com/minors/player.cgi?id=garcia002jas.

If you don’t believe me about Garcia being an intriguing prospect, consider this. Before one game I attended, I was asking a person in the Boston organization about another pitcher on the Lowell team. The person answered my questions, but then told me that if I was interested, I should check out Garcia, because he was hands down the best pitcher on the team. Going off that tip, I conducted an interview with Garcia, and found out a little more about the pitcher that many believe is going to be one of Boston’s next top prospects.

How did you first become interested in baseball?: Growing up, my parents introduced me to a lot of sports, and as I got older I started to play baseball and football a lot. When I was around 11 we moved to Florida and I decided to just stick with baseball, and my parents stuck by me with whatever I wanted to do. So, around the age of 12 we moved to Florida and I saw baseball was year round, and so I fell in love with it.

Did you have a favorite team growing up?: Growing up, my uncle had season tickets to the Mets, so I grew up in Shea Stadium a lot. That was my team growing up.

What was the draft process like and how did you know that the Red Sox were interested in you?: Around halfway during my senior year I started to get a lot of interest, a lot of questionnaires from a lot of pro teams. The Red Sox contacted me, and it’s actually a funny story. The scout was actually supposed to come on Thursday, and I had a practice on a Wednesday night, and he got the dates mixed up. He was waiting in my house for about six hours with my Mom, while I was at practice. So, he stayed at the house for a while, and ever since then we kept in contact a lot. He’s a really nice guy; Anthony Turco. He always came to practices to watch me throw.

After you signed with the Red Sox, did you do anything special for you or your family?: No, we had a couple of friends and family over and had a nice little barbecue before I left. I signed right away and left a week after graduation, so it was kind of just a quick thing.

What type of pitches do you throw?: I throw a four-seam, a two-seam, a slider, and a circle change.